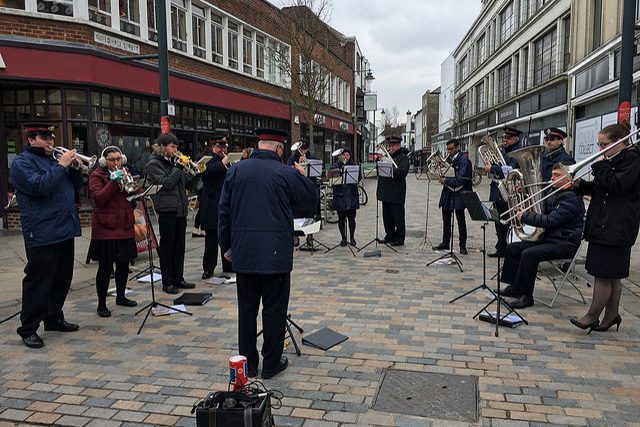 The General returns to his roots at Canterbury, UK

General André Cox returned to a city and Salvation Army corps of his childhood when he and Commissioner Silvia Cox, World President of Women’s Ministries, led a weekend of praise and testimony at Canterbury Corps in the United Kingdom Territory with the Republic of Ireland.

During a Saturday evening festival at the corps hall, Commissioner Cox gave her testimony of her life of travel and service to God. She emphasized the need to continue trusting in God, no matter what happens.

Canterbury Community Coordinator Claire Greenway also shared her testimony of how she came to accept God and the healing he provides after a dramatic revelation during a trip to South Africa.

In his message, the General encouraged Salvationists and friends to be unashamed of their religion, instead remaining committed to spreading the good news to the world.

He also recalled some family history, explaining that his great-grandfather had reportedly been a “local drunk” who, after encountering members of Canterbury Corps, was saved and stopped drinking. He reflected that, without the obedient faith of the people his ancestor came into contact with, he wouldn’t be where he is today. 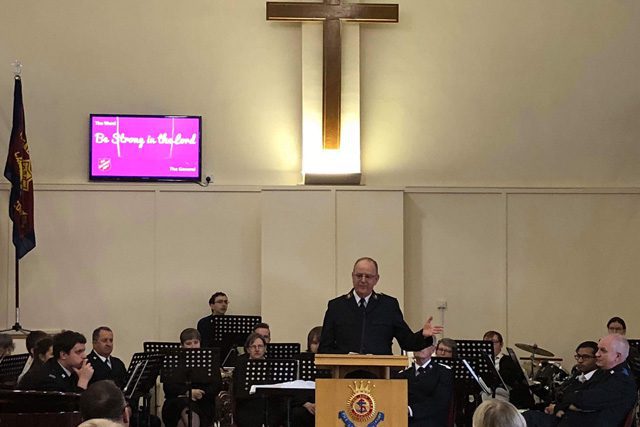 During the meeting, Major Linda Herbert, South-East Divisional Leader for Leader Development, introduced the Women’s Ministries Helping Hand Appeal for 2018, “Waves of Transformation,” with a collection taken for the work of the project that provides life-giving water to those in need worldwide.

General Cox led the Sunday morning worship service. The beginners’ brass group, the First Things First Ensemble, played “Thank You, Father!” The General told the young musicians that he had played his first notes on a brass instrument “in this very hall.”

After the General’s message to “’Be Strong in the Lord,” seekers came to the mercy seat for prayer and commitment.

Braving the unexpectedly wintry weather, the international leaders went out onto the High Street to reach the local community. participating in a short service of familiar hymns and music before the General spoke to those who had stopped to listen, encouraging them to be aware of God’s message in the music they heard. 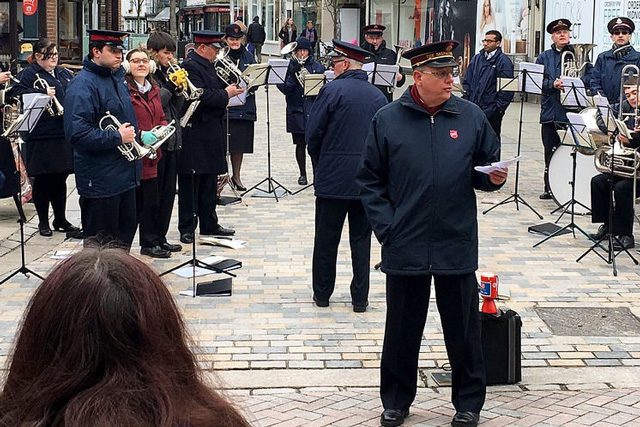 The Coxes also participated in Table Talk—an informal time of discussion over a meal—held monthly on a Sunday at the corps for both members of the corps and the community. Corps Officer Major Mandy Sands introduced the international leaders to attendees, many of whom had met The Salvation Army through The Annexe drop-in center, which is linked with the corps. Commissioner Cox spoke on the promise in John 8 of the spiritual freedom that can be found by accepting Jesus.

Throughout the weekend, the Canterbury Band and Songsters provided music.

From a report by Keziah Cawkwell