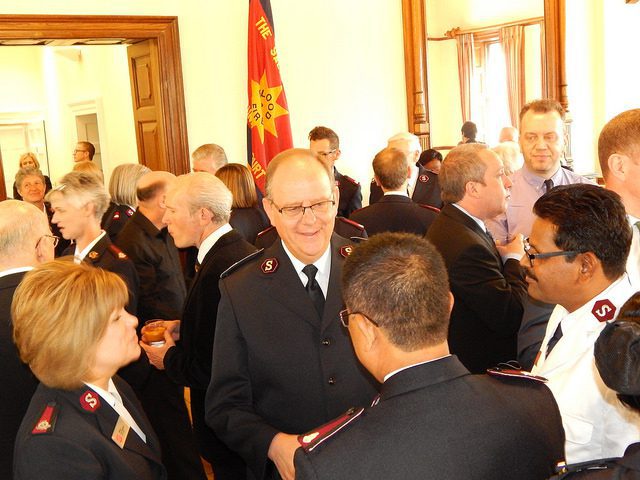 General André Cox reopened The Salvation Army’s historic Sunbury Court with a reminder that the “beautiful and magnificent venue,” to the west of London, was only a tool for God to use. The real significance, he said, came about through the lives that would be dedicated to God at what is now home to the International College for Officers (ICO) and Centre for Spiritual Life Development (CSLD).

Purchased by then-General Bramwell Booth in 1925, Sunbury Court has since been at the heart of many Salvation Army programs, most notably as host to the High Council (the group that meets to elect a new General). Only three High Councils have not been held at this venue.

At the heart of the grounds is a large Georgian mansion, joined in recent years by the conference center and a newly built accommodation suite, which will allow Sunbury Court to be a venue for conferences and retreats.

The reopening day included the welcome meeting for the first ICO session to be held at Sunbury Court. Previous sessions were held at The Cedars, in south-east London. Before he cut the ribbon to officially open the new accommodation block, which will be known as The Cedars, the General paid tribute to the ICO and CSLD staff for the “mountains” they had climbed to move the whole administration from The Cedars to Sunbury Court. He also paid tribute to the work of the architects and the International Headquarters (IHQ) property team.

The ribbon-cutting ceremony included a prayer poem, read by Chief of the Staff Commissioner William Roberts, written by then-General Albert Orsborn for the opening and dedication to God of The Cedars in 1950. Cox added his own words of prayer: “As we dedicate this building we dedicate ourselves anew to you.”

The General in conversation | Photo by Major Brenda Tan

The gathering began with a reception in the mansion house, attended by the General and Commissioner Silvia Cox, World President of Women’s Ministries, Roberts and Commissioner Nancy Roberts, World Secretary for Women’s Ministries. Former international leaders Retired General John Larsson, and Commissioners Freda Larsson and Gisèle Gowans were also present. Other invited guests included Commissioners Clive and Marianne Adams (territorial leaders, United Kingdom Territory with the Republic of Ireland), staff from the ICO, CSLD and IHQ, delegates of ICO session 221 and representatives from the architects and the building company that had worked on the project.

Commissioner William Cochrane, international secretary to the Chief of the Staff, described what had taken place as “a transformation—a beautiful restoration,” and paid particular tribute to the architect firms, Dyers and Mabers, to the building company, Huttons, and to property advisors CBRE for their skilled and speedy work.

In what may have been a first for the historic venue, ICO delegate Captain Clemence Komnapi, from Papua New Guinea, offered the grace in Pidgin before those assembled shared fellowship over a meal.

In a flag-breaking ceremony, three ICO delegates received The Salvation Army flag from the General before it was hoisted up the pole to the strains of “We’ll Lift Up the Banner on High.”

The day concluded in the conference center with the official welcome to 31 delegates of ICO Session 221.

In his message, the General spoke about the importance of realizing—even while in an iconic venue—that God was not confined to any place. “God is everywhere,” he said. “We can meet with God everywhere.” He acknowledged that ICO delegates were being given an opportunity to step away from their day-to-day ministry in order to spend time with God, but he laid down a challenge for when they return home: “We need to find ways to connect with God in the busyness of everyday life.”

He concluded: “I pray you will know that God is truly with you wherever you go from this place.”