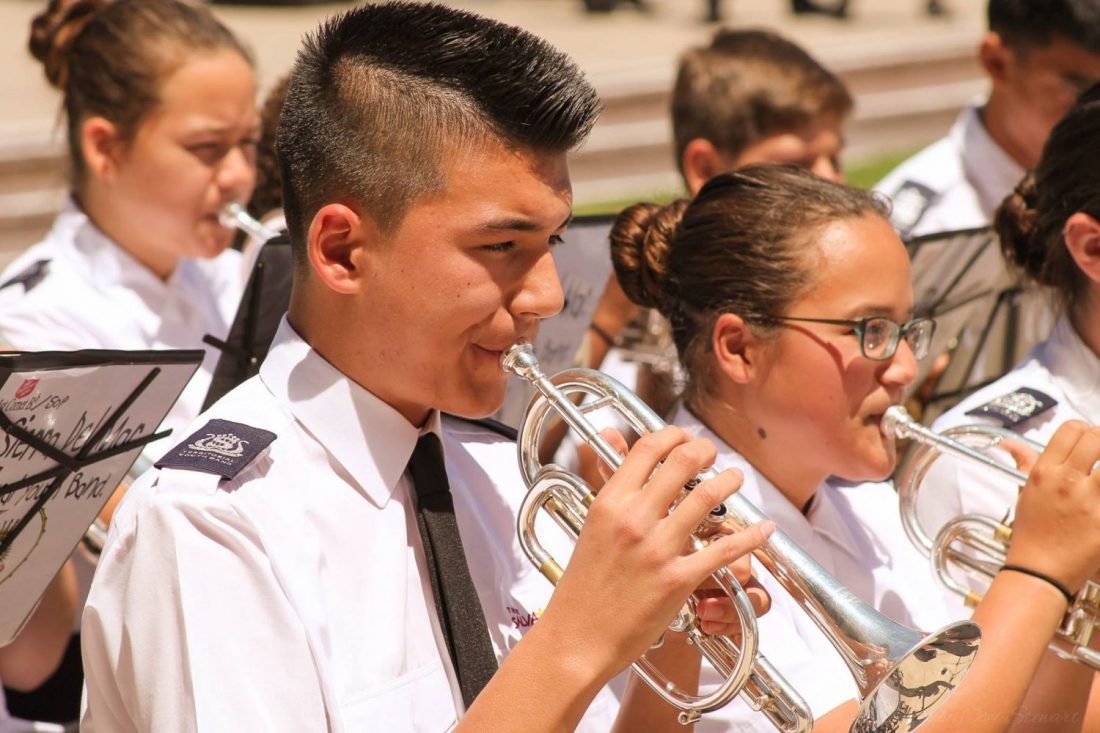 The Salvation Army North American Brass Celebration brought together all five North American staff bands to celebrate the 10th anniversary of the USA Western Territory Staff Band (WTSB). The Canadian Staff Band, New York Staff Band, Chicago Staff Band and the USA Southern Territorial Band joined the WTSB May 21 at the Terrace Theater in Long Beach, Calif., for a day of music-making culminating in a gala evening concert that featured new music written just for the occasion and old favorites.

“The North American Brass Celebration is unprecedented in the history of The Salvation Army,” said New York Staff Bandmaster Ronald Waiksnoris. “Never before have bands from five North American territories gathered for a celebration like this.”

What distinguishes the music of The Salvation Army is its purpose–endorsed by all involved–to share the love of Jesus through music.

“The brass band is a birthright of The Salvation Army,” Waiksnoris said. “God gave us something unique to use in ministry.”

Salvation Army music lovers traveled from near and far for the event, with almost 2,000 people attending the evening concert.

“Did I die and go to heaven? If this is what heaven is like, I can’t wait,” Major Raymond Erickson-King said as he waited for the gala concert to begin.

Territorial Commander Commissioner James Knaggs welcomed the audience to the main event, saying, “Enjoy the music, enjoy the message. Get to know the Master.”

Smith emphasized that for these bands, “the main focus every day is to worship.”

Master of Ceremonies William Himes, O.F., took over, guiding the audience through the evening with a light and witty style. Himes served as conductor of the Chicago Staff Band from 1977-2015.

“What a birthday party this is–a wonderful sound offering to the Lord,” Himes said.

The gala commenced with “They Shall Come From the North, South, East and West,” a medley by Kevin Larsson, with the WTSB accompanying each of the other bands in playing part of musical piece intrinsic to its territory.

“Frontier Vision” (Stephen Bulla) featured the WTSB on its own. The band recently released a CD of that name, available at Tradewest.com.

An unparalleled fullness of sound emerged when all the bands played together; buoying listeners up on a sea of sound. This effect was first noted during “God Is There,” by Robert Redhead, who was present in the audience.

“If it’s a good tune, we’ll [The Salvation Army] put our own words to it for the glory of God,” Himes said as he introduced “Salvation’s Song,” by William Gordon, a festival march incorporating the tune of “The Bells Of St. Mary’s.” Gordon was also in the audience.

Audience members did participate, getting to their feet to sing “All Creatures of our God and King” (William Himes) and the closing “Evening Hymn” (Ray Steadman-Allen).

Music combined with spoken word in “The Pilgrim’s Progress” (Philip Wilby), as the story of the pilgrim’s journey to the celestial city was told through music and words, narrated by Robert Docter, O.F.

In his message, James Knaggs reflected on Jesus’ message to his disciples in John 13: 34-35, when he tells them to “love one another.” Knaggs noted that Jesus remembered everyone else in John 17:20 when he says, “My prayer is not for them alone. I pray also for those who will believe in me through their message” (NIV).

“Jesus was praying for us, that we might be in concert together, like tonight,” Knaggs said. “We’ve received a deep message of love, resurrection and grace…[and we see] how when you play your part and follow the leader, [the individual parts] come together in beautiful harmonies that bless one another.”

After the benediction from Commissioner Susan McMillan, Canada and Bermuda territorial commander, the staff bands closed the evening with the festive march “Praise” (Wilfred Heaton).

The WTSB birthday celebration ended after the gala evening concert with a reception on the Terrace Theater Plaza, where people shared their reactions. For some attendees, this event was their first encounter with the staff bands.

“It was very inspiring to hear the individual staff bands, but when we were able to sing with the massed bands, it was astounding; you could feel God’s presence in the room,” said Kyle Santiago, Western Territorial Youth Band trombonist.

The visiting bands and the Western Territorial Youth Band continued to minister May 22, participating in Sunday morning worship at Southern California corps. Later that day, all the bands marched triumphantly down Disneyland’s Main Street, sharing the joy of the Lord through music.