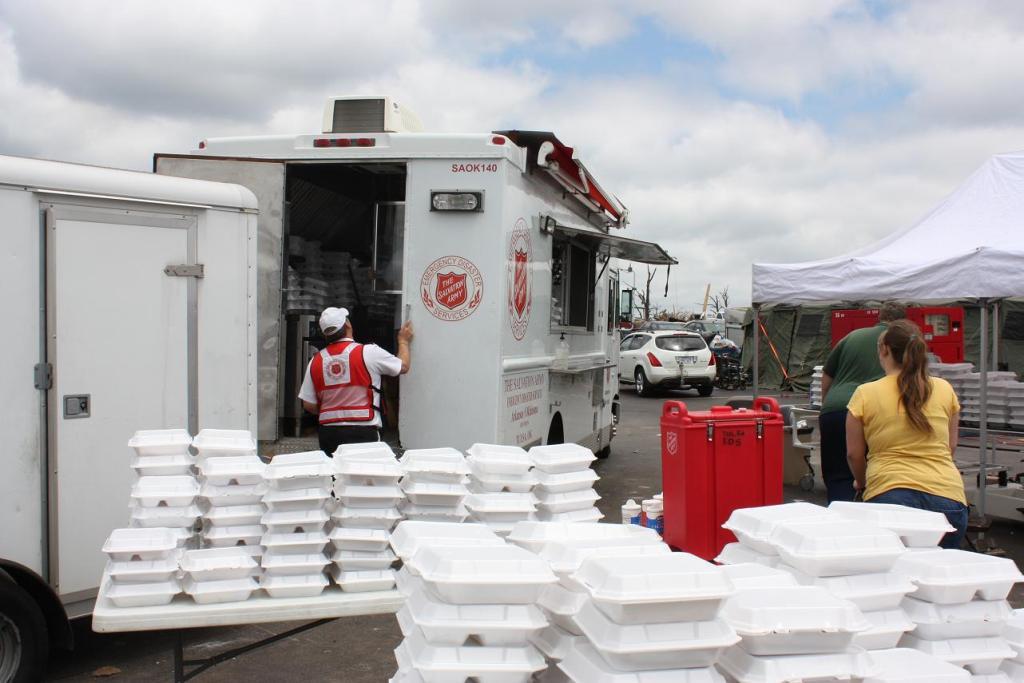 The use of social media has proved beneficial to The Salvation Army’s tornado response in Joplin, Missouri, USA. Members of Solace – a church and music venue – formed a partnership with The Salvation Army which ensured assistance could be provided as quickly as possible.

Amber ‘Zon’ Gleeson, coordinator of Solace’s relief effort, says that a praise concert was being held at the church when the tornado struck on 22 May. People at the concert took shelter in the back of the building and, when the skies cleared, they came out and surveyed the destruction. ‘The people that were here walked outside, saw people wandering the streets and went out to help.’ she says. ‘The Salvation Army was the first relief agency on the scene so we just went to them and asked what they needed.’

The church quickly gathered cases of water and – utilising social media including Twitter and Facebook – put the call out for supplies. ‘We needed a trailer for the canteen on 20th Street and we had one within two minutes of putting the call out there,’ says Amber. Another church member managed to obtain sports drinks.

The donations Solace received are substantial. Since the disaster The Salvation Army has served more than 23,000 meals to survivors and rescue workers. It would not have been able to meet needs as efficiently without the quick response and support of the the team at Solace

The aid doesn’t stop with food, clothing and supplies. One church member, Priscilla, was able to use her connections to provide a family in need with an electrician to help them make home repairs.

The Salvation Army has received remarkable support as it helps the people of Joplin to deal with the worst single-tornado disaster for more than 50 years.

Wal-Mart donated 36,000 bottles of water for Joplin relief efforts; Sprint gave 1,500 prepaid cell phones which were distributed to survivors; a Kansas City Salvation Army Advisory Board member secured several generous donations from Sam’s Club including eight pallets of Gatorade drink, plus gloves and shopping carts that will be used at the Emergency Disaster Services store, where people affected by the tornado can buy everyday items with vouchers. Sam’s Club also provided one freezer truck and one 45-foot refrigerator truck. Folsom Distributing of Wood River, Illinois, has offered more than 100 cases of Gatorade, apple juice, orange juice and water. The Loading Dock, a restaurant in Grafton, Illinois, is collecting cases of water in exchange for its handmade salsa. Con-way Freight will pick up the cases of water and deliver them to The Salvation Army in Joplin.

A water bottle drive organised by the Kansas City Chiefs American football team brought in 200,000 bottles. The team will also be sending more than 100 volunteers on June 24 to assist The Salvation Army.

Monetary donations have also been flooding in, with almost $800,000 already received – including $150,000 from Wal-Mart and an astonishing half-million-dollar donation from Joplin residents Debra and David Humphreys.