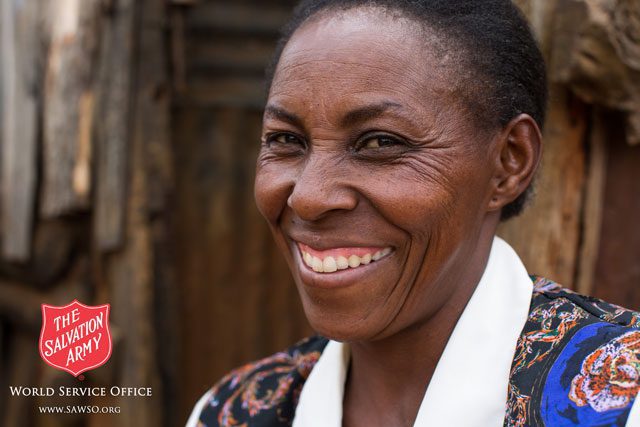 The Salvation Army World Service Office (SAWSO) works as the steward for American supporters of international aid, now under the leadership of Lt. Colonels Thomas and Jacalyn Bowers a

They realized their call to do more for their comrades serving overseas after working in international development and a string of working visits to Nigeria and Kenya.

Since becoming officers in 1978, the Bowerses have served in the Central Territory as corps officers, divisional youth leaders, divisional and territorial staff, and most recently as divisional leaders in the Western Michigan and Northern Indiana divisions.

They now work to develop long-term community driven solutions to the issues of poverty, disease, disaster, disadvantage, and abuse in developing countries where The Salvation Army is active around the world.

“I am always amazed with how God works,” Thomas Bowers said. “I can’t honestly think of any other appointment in the Army world where I would rather be than SAWSO, here and now.”

Thomas Bowers said he loves to empower team members and those we serve to be able to accomplish more than imagined.

“Selfless and concerned for his officers and staff, he is a leader with a vision who looks for solutions,” said John Schroeder, divisional development director in the Western Michigan and Northern Indiana Division.

Bowers said he is convinced they could help international territories in developing countries strive for self-sustainability, a priority for General André Cox.

“To empower our global neighbors toward financial independence would be transformational,” Bowers said. “We have an opportunity to watch God accomplish his purposes through our efforts. We just need to be faithful to the vision and direction he gives.”

Here, the office provides an update on four of its current projects.

SAWSO seeks to elevate women in Kenya out of the circumstances caused by widowhood through the WORTH project, which creates a new cycle of sustainability fueled by holistic education and empowerment.

In many developing countries, widowhood often represents a social death for women who suffer with not just the sadness over loss of life, but also the loss of status, safety and position in the family.

WORTH brings together groups of 20-30 women, providing literacy and savings training and social mobilization. Program members are taught how to read and write, keep business records, account for group and personal savings, and to run their own businesses. The small communities of members meet weekly and lean on one another for emotional support, financial contributions, and accountability.

When her husband passed away, Jane, a citizen of Kitale, Kenya, was left with five children to raise and was soon expecting another. Like so many other single and marginalized mothers in the region, financial pressures began to mount and she found herself struggling to provide the basics for her large family. Food was scarce in the home and the children were often forced to miss school due to the high cost of education.

Through WORTH, Jane launched her own ironworks business that also ended a period of selling herself for sex.

Three years after joining the program, her business is thriving and her children are receiving an education, with some going on to attend university. Jane is now the boss, and to meet demand, recently hired two men to support her growing business.

Since the initial implementation of the WORTH project over 10 years ago, The Salvation Army has brought new hope and opportunity to more than 50,000 women and their families in Tanzania, Kenya and Uganda thanks to the generous support of donors.

Nigeria has the second highest number of new HIV infections reported each year, and an estimated 3.7 percent of the population are living with HIV, according to UNAIDS. Lagos State, in particular, has experienced an increase in HIV/AIDS infections and insufficient response to the need.

Ijora, one of the six communities of CHAIR, is a jumble of tiny shacks crowded together and built on stilts over a trash-filled swamp, housing migrants from around West Africa. Prostitution and drug abuse abound here, putting the residents at high risk of contracting HIV.

Salvation Army staff and officers—sponsored by SAWSO—conducted a day of outreach education and HIV counseling and testing. Using the small structure with wood plank and tarp walls that serves as a community center as its base, the team invited the slum’s residents to come for HIV tests.

Testing is a major component of SAWSO’s CHAIR project, which aims to reduce the rate of new infections, provide care and support for those infected and affected with HIV, and reduce stigmatization in Lagos State.

CHAIR also trains community leaders and other key individuals to address stigmatization and encourage positive thinking, a component that supports SAWSO’s commitment to creating sustainable communities where members are personally active in improving quality of life.

An Ijora resident, a diminutive middle-aged lady, had completed CHAIR’s two-day training for volunteer community mobilizers just the day before. The team was concerned because she had been quiet during the training. She seemed reluctant to interact with other trainees and appeared to have trouble understanding the information.

But in her own community, she was transformed. Megaphone in hand, she led the team’s small parade through the settlement, calling out for her neighbors to come for testing. The warmth with which she was received resulted in a constant stream of community members requesting HIV testing and counseling.

The dialysis room at the Polonnaruwa Hospital in Sri Lanka.

In the last 20 years, chronic kidney disease “of unknown origin” has killed up to 20,000 people and sickened as many as 400,000 more in a poor rural area of Sri Lanka. The World Health Organization (WHO) reports nearly 15 percent of people of the region’s Anuradhapura, Polonnaruwa, and Badulla Districts ages 15-70 years are affected, with approximately 13 people dying of the disease daily.

SAWSO is working to change these statistics by sponsoring outreach education and mobile screening clinics in Polonnaruwa District, an area identified by the government as being underserved due to the severity of the disease.

Salvation Army staff work to detect the disease early, when its progress can be reversed by treatment, by offering urinary protein and blood glucose testing to gauge residents’ potential risk or current level of kidney damage. The Army provides high-risk individuals with referrals to the local district hospital, where a kidney specialist provides treatment that can include dialysis for advanced cases.

Locally, The Salvation Army offers preventative services by helping residents clean their wells after flooding and through water distribution.

Suraj Rangana, a resident of Polonnaruwa, was 29 years old when he suffered a wound on his left foot that would not properly heal, even with treatment from the local hospital. Married with two children, he was soon unemployed due to the disability and worrying about how to provide for his family and his children’s education.

When The Salvation Army Mobile Medical Clinic came to his neighborhood, personnel confirmed he had chronic kidney disease. Government-funded dialysis was available, but traveling to the area’s General Hospital for treatment twice a week created burdens of both time and cost. Within five months from the time of his diagnosis, a relative agreed to donate a kidney and Rangana underwent a transplant that changed his life.

Now serving as an employee of the Safe Water and Livelihood Development Project of The Salvation Army in Polonnaruwa, Rangana is overcome with gratitude.

More than 20,000 people have been screened for the disease, and 1,500 people tested positive with approximately 700 people referred to the General Hospital.

In just 45 years, Taiwan has experienced rapid economic growth as it has moved from an agrarian to an industrial society. Now home to more than 23 million people, the societal transformation of this small island has resulted in rising levels of crime, addiction, juvenile delinquency and suicide, which became the second leading cause of death among young people in 2014.

The Salvation Army established the Puli Youth Services Centre (PYSC) in 2002 to reach disadvantaged youth in Puli Township. Working in collaboration with the area juvenile justice system, the PYSC offers physical, emotional and spiritual support to teenagers, mostly boys ages 12 to 18 years, who have lost parental care and often come from broken families or backgrounds of domestic violence, poverty or criminal history. Through continual support, including housing and basic services, the PYSC seeks to develop the character, integrity and future of these young residents through counseling, ministry and encouraging service to others.

In 2014, SAWSO purchased a dormitory building for the PYSC, reflecting SAWSO’s vision of fostering safety and opportunities for communities in need. The new building provides permanent housing for 80 boys at any given time. Now in its 13th year, the PYSC offers higher education, vocational training, and job placement for residents, with many teenagers graduating with job opportunities and new hope for the future.

A young member, Jun, was physically abusive toward his mother prior to joining the PYSC. He received emotional counseling and life skills education, which gradually changed the misconceptions he had about his family. With assistance from The Salvation Army, Jun received professional caregivers training and became a qualified practitioner specializing in caring for physically challenged senior citizens.

Now an active member of The Salvation Army Puli Corps, Jun’s newfound faith and stability have allowed him to rebuild relationships with his family.