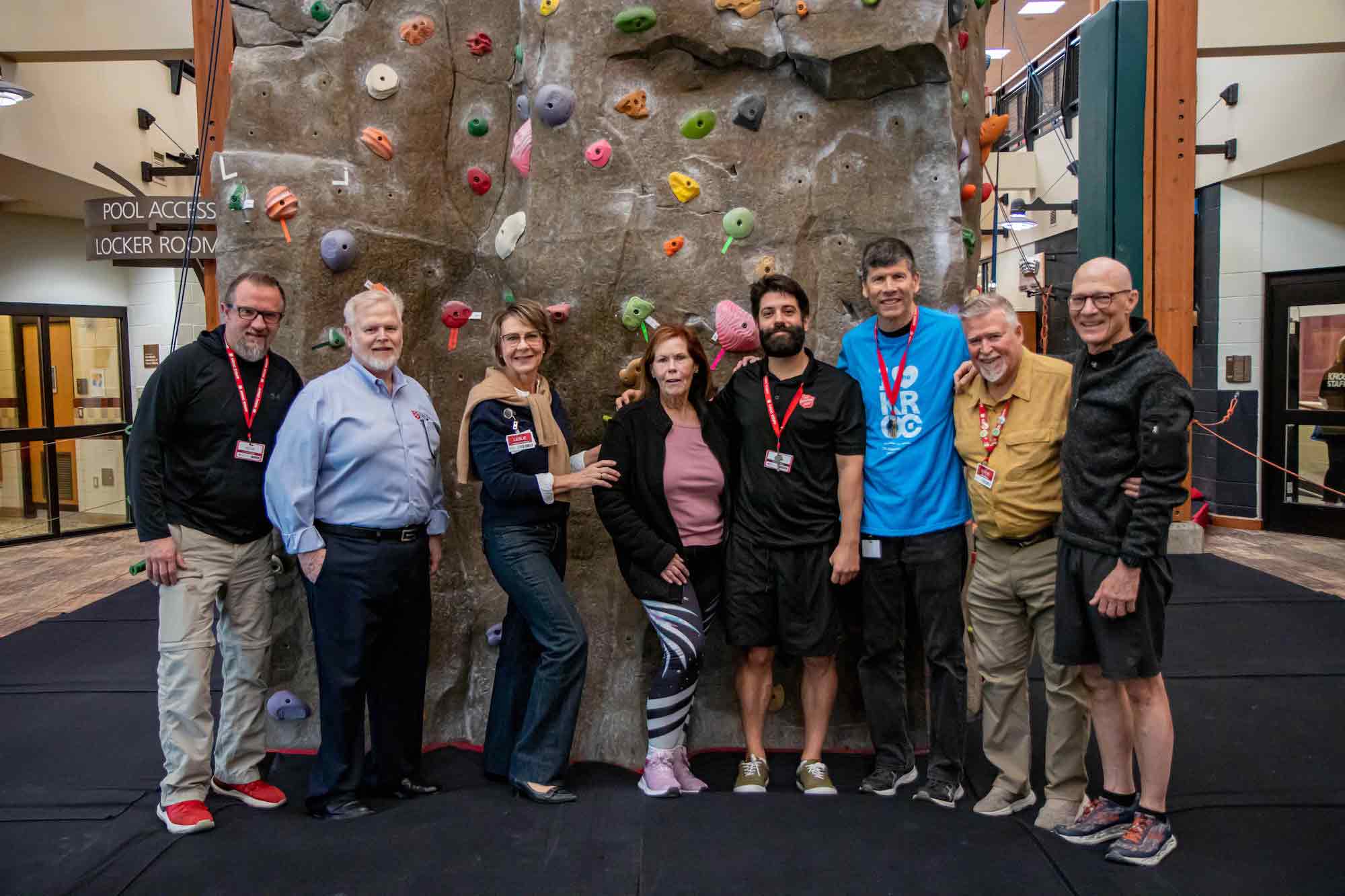 When Diana Williams became a member of The Salvation Army Ray and Joan Kroc Center in Coeur d’Alene, Idaho, she dreamed of one day climbing the rock wall, even including it as a goal on her bucket list.

Eight years later and in her late seventies, Williams said she still hadn’t climbed the wall.

Hoping to find the encouragement and support needed to reach her goal, Williams joined the center’s wellness program (The Well) in March 2022. During the two-hour program, participants gather to discuss health and wellness topics, check in on personal goals and exercise together.

Soon after announcing her goal, Williams said she “went on a severe routine of exercise” to build up the arm and leg strength needed to propel up the wall. “Everyone knew what I was trying to accomplish…As time went on, everyone watched what I was doing,” she said.

Within a few months, Williams said she was able to lose 40 pounds, improve her balance and build up her strength through weight lifting, bicycling, yoga and water resistance training.

By Williams’ birthday in May 2022, she had climbed “about half-way up” the two-story high rock wall.

“It was a really, really good experience,” she said. Following Williams’ success, Community Outreach Coordinator Leslie Johnson asked if the center could throw a party to celebrate her accomplishment.

“The experience was something I never would have imagined,” she said, mentioning the morning celebrations filled with birthday cards, words of encouragement and even a cake with fresh fruit. “[It was] moving and it opened the doors to many other things I can do,” she added.

Now, Williams said she continues attending The Well to provide support for others in pursuit of their goals. “There are all kinds of different people and everybody has a different story,” she said. “For a lot of people, [The Well] is a place to go where they can find people they can talk to and be accepted by and learn some new things.”

Using his experience as a rural-area Emergency Room (ER) doctor, Kroc Advisory Board member, donor and program volunteer Ben Pershau said he has given Kroc Talks—presentations on health or wellness-related topics—on subjects including meal preparation for families and his perspective on the healthcare system.

“A lot of our talks are centered around diet and nutrition,” Pershau said.

Kroc Talk presentations also focus on “the core components of wellness,” like mental health, social relationships, sleep and physical activity levels. “These are the things that really do matter a lot,” he said.

“Everybody’s there for a different reason…I need it, everybody needs it,” he added. “I think that having a sense of community for people where they can meet and talk about life while also being held accountable to setting a goal and working through it and having a sense of accomplishment…These things are needed in our society.”

What is most encouraging, Pershau said, is seeing the success stories from people, like Williams, making “positive changes in their lives.”

About a year ago, Kroc member and program participant Dave Brown said he began attending The Well “to better [his] life” after being released from prison. “It’s an opportunity for people to listen, to exercise, to socialize and to realize that the world is sometimes a better place than what we think it is,” he said.

Using the program’s SMART goal-setting and tracking workbook, Brown said he made it his goal to exercise more and break his “cookie habit.”

Through weekly small group discussions and monthly forums, participants have the opportunity to share their progress with others and get advice from medical professionals, like Pershau and other guest speakers from the community.

Kroc member and program volunteer Joe Abate said the small group discussions are important in the process. “That’s where the power is,” he added, noting how smaller-scale connections can help people feel supported in the pursuit of their goals.

“It’s really about walking alongside people, being interested in their lives and giving them a safe place to tell their story…I think The Salvation Army gets that, so it’s a great place to have this forum.”

In addition to his work as a “dedicated volunteer,” Kroc Administrator and Corps Officer Major Don Gilger said Abate serves as “the heart and soul” of The Well program. Prior to helping to design the program’s current format and structure, Abate worked as a cardiologist for 30 years where he said he served patients with “lifestyle issues,” regardless of health insurance status.

While Abate said the program started with an emphasis on educating participants on topics related to healthy behaviors and exercise, over time it transformed into a holistic wellness initiative that helps people “accomplish their goals,” whether physical, mental or spiritual.

“We’re really treating a lot of social isolation,” said Abate. “People who had been in their house for months and months, just depressed and unwilling to come out.” During this time “a lot of people are struggling with resiliency, overcoming past trauma and trying to problem solve,” he added.

By “being curious” and taking a “different approach to looking at people’s lives,” Abate said he sees people in the program receiving more holistic care.

“It’s clearly a mission,” he added. “This is a place where people feel safe, they feel open, they’re willing to share parts of their story that they don’t just share with anybody.”

In 2021, The Well helped transform the lives of 50 families through fellowship, life skills training, group exercise and access to medical professionals, according to the center’s annual report.

Currently, The Well’s programming draws in around 30 people per week. However, the center expects that number to increase to 50 in the fall.

In the last year, Abate said he’s seen how The Well helps people to “connect with others” after long periods of isolation during the pandemic. “Those are the stories that bring tears to my eyes,” he said. “I think it’s very impactful.”