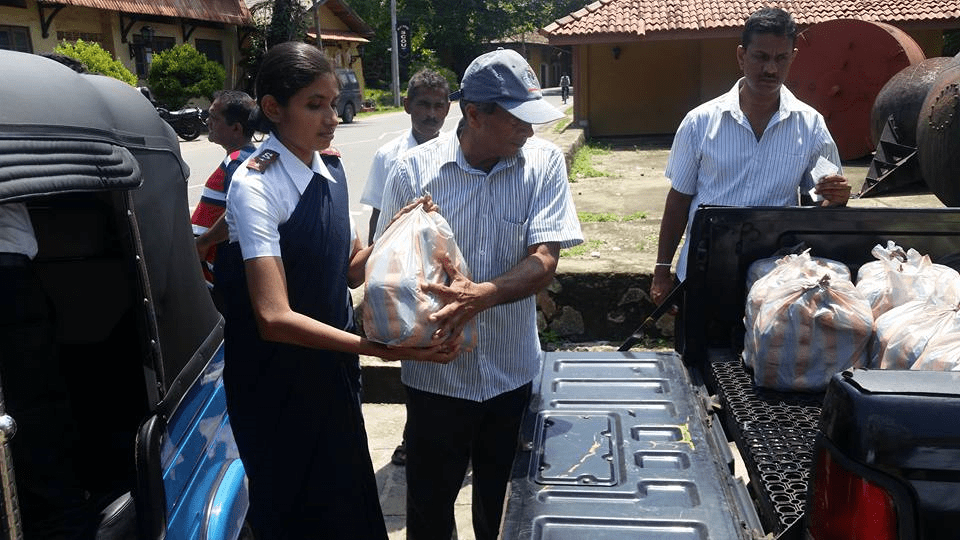 Severe flooding and mudslides have displaced more than half a million people.
By Peter McGuigan –
Following severe flooding and mudslides in south-western Sri Lanka, The Salvation Army is providing much-needed practical and spiritual support to hundreds of families and individuals.
More than 200 people had lost their lives as a result of the monsoonal deluge and 96 were still missing as of May 31. Over 1,500 homes have been destroyed and thousands more damaged. More than half a million people have been displaced and tens of thousands are being sheltered in 366 safe locations.
Local officers initially had trouble mounting relief work because of inundation in Salvation Army properties and the associated dangers. As flood waters subsided, relief operations kicked into full swing.
“Because of the damage to our own properties, The Salvation Army’s response was totally dependent upon our own capacity in any one town or village to address the impact of the flood upon ourselves and to support the community at the same time,” said Captain Felix Kumaravel, The Salvation Army’s Secretary for Business Administration in Sri Lanka. “We are now in full response mode. Being able to mobilize people and supplies from other parts of the island that had been cut off from the south.”
Survivors have received truckloads of supplies dispatched from the capital Colombo, and Salvation Army teams from the city have bolstered on-the-ground support. Teams are also working in low-lying areas of the capital itself. Kumaravel said that relief work has not been easy.
“The Salvation Army will also be assisting in the clean-up operation with our teams helping families re-establish reasonable living conditions in their home,” Kumaravel said. “We are grateful to the Government and other agencies that are helping, including the arrival of international aid. A large-scale humanitarian response is underway and The Salvation Army is glad to be making its contribution.”
To support relief effort, visit https://bit.ly/tsa-donate

From a report by Major Peter McGuigan