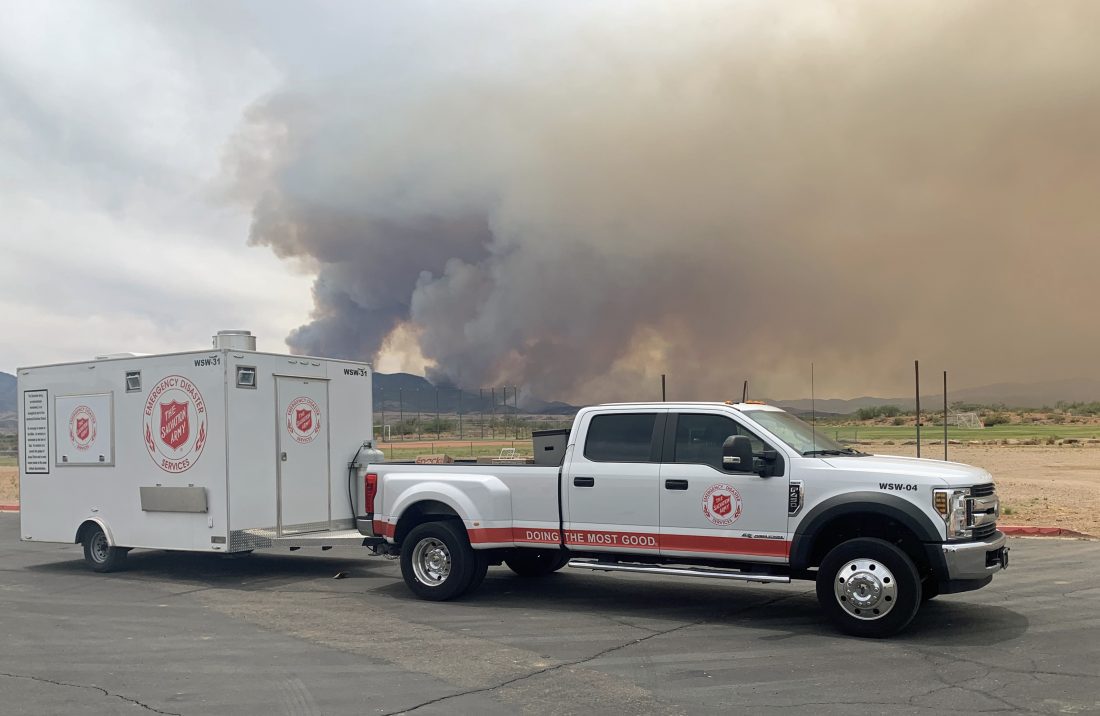 After spending weeks in the Globe-Miami, Arizona, area during an Emergency Disaster Services (EDS) response to feed displaced residents and first responders of the Telegraph and Mescal Fires, recent rains produced flash flooding that left area streets buried in mud and debris.

Captain Jeff Williams, Chandler Corps Officer, led The Salvation Army’s response in the area, first offering support after the fires and then after the flood—even securing wheelbarrows, shovels and cleanup kits to help residents with the aftermath.

“When we first arrived at the shelter, we were supposed to cook dinner that evening but we realized no one had eaten. Everyone had fled because of the fire and hadn’t had a meal, so we started cooking immediately,” Williams said. They served some 500 meals over the next eight hours. “That continued for a few days.”

The team also began providing resources to first responders working the Emergency Operations Command when it was discovered they didn’t have resources for meals and hydration.

“They were survivors themselves—about half were evacuees from the fire,” Williams said. 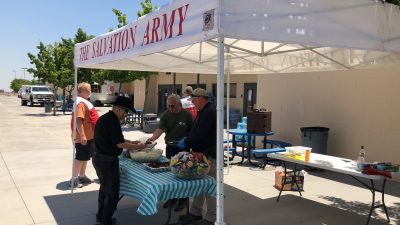 The Salvation Army partnered with Safeway to use an empty location nearby as a community resource center, offering supplies and sustenance throughout the month of June.

“We closed in July, knowing that anytime you have a fire that size, you’re going to have a flood. We pre-planned knowing we would probably be back again, unfortunately,” Williams said. “So we staged everything in the warehouse just in case.”

Storms in late July triggered flooding of the burn scar areas, sending mud and debris through the small towns and flooding homes and businesses.

“I went to assess the situation and met with the incident command team, which immediately asked how soon we could be open, so we again opened the doors to the resource center right then,” Williams said.

From July 30 to August 1, EDS staff and volunteers—including Williams’ daughter—served some 60 families with cleanup kits, food boxes, hydration and gift cards, and connected them to additional resources as needed.

“These are people who’ve lived there their whole lives,” Williams said. “They’re homeowners. They didn’t even know where to turn. Many said their family has lived there for generations and—and now they have no home. We prayed with people and helped coordinate next steps.” 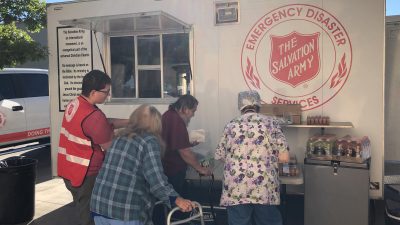 The Service Extension Unit in Globe will continue offering supplies to the community, along with the daycare program it has long operated. Williams said The Salvation Army is assessing how it can deepen its presence in the area, knowing there is great need.

“It’s been a tough go,” he said. “For three months, these communities have dealt with nothing but disasters. A lot of these people won’t be allowed to rebuild where they lived.

“I don’t think our job is done by any stretch of the imagination,” Williams said. “They are going to need us for years to come.”