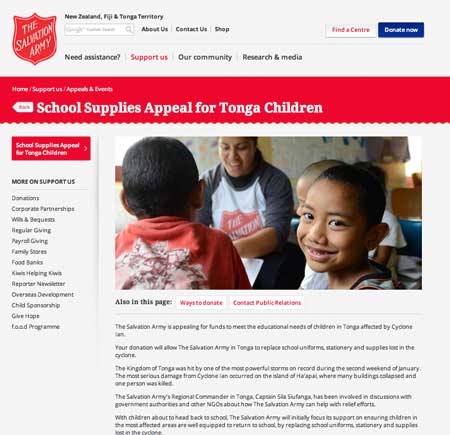 The Salvation Army is arranging practical assistance after the South Pacific kingdom of Tonga was hit by one of the most powerful storms on record. The most serious damage from Cyclone Ian occurred on the island of Ha’apai, where many buildings collapsed and one person was killed. The category five cyclone included gusts of almost 180 miles per hour.

The Salvation Army’s Regional Commander in Tonga, Captain Sila Siufanga, spoke with government authorities and other non-governmental organizations about how the Army can help with relief efforts.

With children about to start the new school year, The Salvation Army will initially focus its support on ensuring that those in the worst affected areas are well equipped, replacing school uniforms, stationery and supplies lost in the cyclone. The logistics for the delivery of these items will be managed from its main office in the capital, Nuku’alofa.

“An immediate need for students in the first few weeks after Cyclone Ian is their education,” Siufanga said. “We welcome donations that will help us buy and deliver supplies to make the start to the new school year less traumatic for children whose lives have been turned upside down.”

The Salvation Army has been at work in Tonga for 28 years and is a well established and trusted presence, delivering a range of social and health programs as well as having five church congregations.

The New Zealand, Fiji and Tonga Territory set up an appeal to support the relief work on Tonga. Donations can be made online at salvationarmy.org.nz/HelpTonga.