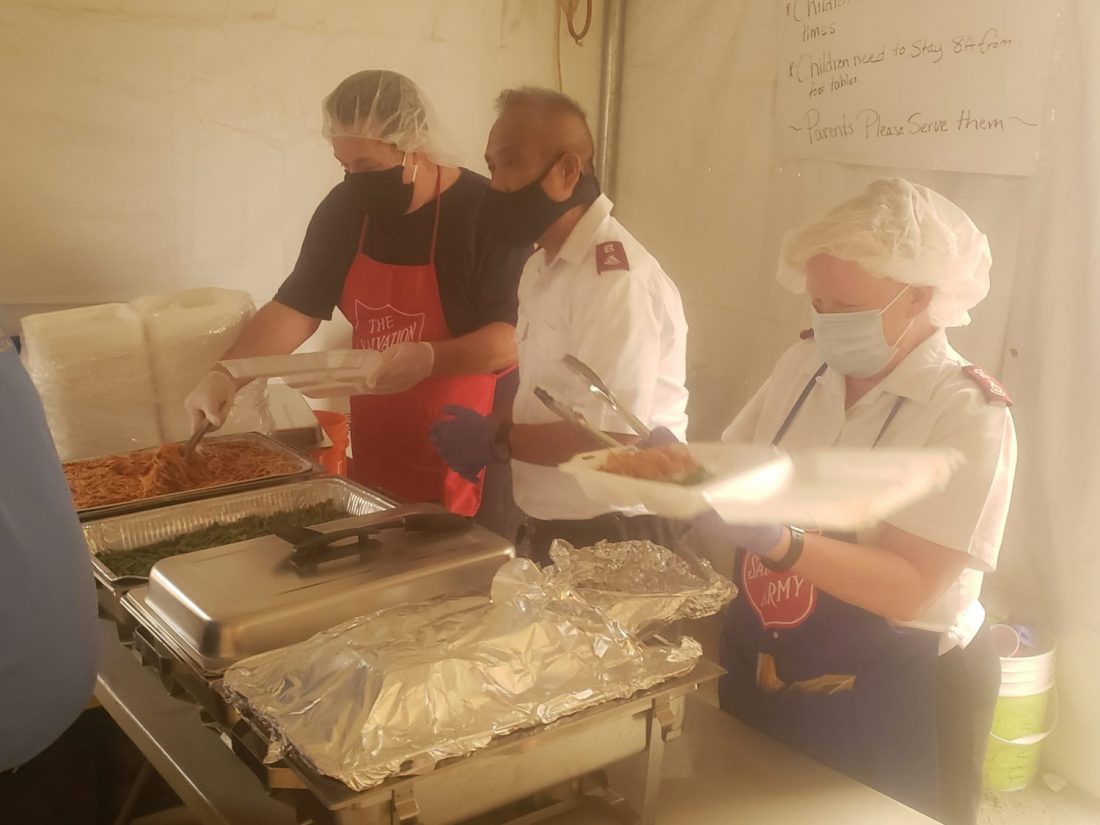 When Double S Horse Ranch opened its property for both animals and people to stay, the menagerie came.

When wildfires prompted evacuations in parts of California’s agricultural region, some ranchers took their animals to fairgrounds in Clovis and Fresno. When those spaces filled, those coming later didn’t have a place to go. That’s when Double S Horse Ranch opened its space for both animals and people to stay on its property in Clovis. And the menagerie came—horses, pigs, llamas, goats, chickens and even a donkey.

In addition to accommodating the animals and allowing humans to stay on the property in tents and trailers, the family who owned the ranch fed evacuees and volunteers caring for the animals. The ranch also serves as a safe location for first responders to go for a meal, or to take a couple hours of rest before they head to the next shift. The efforts quickly became overwhelming. After praying about the situation, the ranch owner asked a friend what to do. The friend, who is a part of a church ministry that brings food to The Salvation Army Clovis Corps, said she’d call The Salvation Army.

“She was just saying how overwhelmed they are feeding three days, three times a day,” said Clovis Corps Officer Captain Jennie Onitsuka-Adams. “They didn’t know where else to go, so they called us.”

Onitsuka-Adams called Fresno Citadel Corps Officers Majors Carole and Daniel Abella, and with leaders from the nearby Salvation Army Service Extension, they toured the ranch to sense what the needs were. From there, The Salvation Army coordinated an effort between the Fresno and Clovis corps and Service Extension, using the Fresno Silvercrest kitchen to cook a hot dinner to serve to first responders, evacuees and animal caretakers beginning Sept. 15.

“The ranch owners themselves are very, very grateful to have us coming out and helping. They were really honestly very grateful for any help that they could receive as far as support,” Onitsuka-Adams said. “The people themselves when we go out into the feeding, they’re smiling. We try and do some emotional care and talk to people…to try and lift their spirits considering the circumstances that they’re in and, and everybody seems to be very receptive.”

The Salvation Army’s meal service efforts at the Double S Ranch is part of its response to wildfires throughout the West. Since Aug. 17, five Western divisions have provided more than 125,000 meals to evacuees and first responders.

At the ranch, the Army is feeding other helpers, too. “Somebody has to take care of all the animals, the pins that they’re in have to be cleaned out three times a day, and the water has to be checked very carefully because, as the ash was coming down, if the horses or the animals drink the water that has ash in it, it can make them very sick,” said Major Carole Abella.  “There were volunteers out there…they have three staff members, volunteers and evacuees, so it was a variety of people that we were feeding.”

One day while The Salvation Army was serving dinner, Abella observed a girl who was evacuated from home walking around the ranch with her dog.

“She was walking barefoot, and she had her dog by the collar, and her dog was as big as she was, but she was very content to be where she was,” Abella said. “I think that that’s the thing, to know that these people are in a place where they can stay safe until the fire can be contained. And whether they’re adults or children to know that they’re in a safe place, and that The Salvation Army can just be a small part of making provision during that time.”

The Salvation Army will continue its meal service to the ranch until it is no longer needed—and some of the restricted areas are beginning to open up, with some evacuees starting to head back to assess property damages. For now, the service will continue to provide food and emotional support on Mondays, Tuesdays and Fridays.

“It may not be your normal, just handout food [meal service]. It’s handing out food to those who have been working hard all day, and for some of the evacuees as well, they’re out there helping to take care of everybody else’s animals too. It really is a cooperation of people,” Abella said. “I think that that’s important, especially in today’s climate. Jesus teaches us to love all people, and no matter where they’re from, what their backgrounds are, we love people in a very practical way. And this is one of those practical ways.”