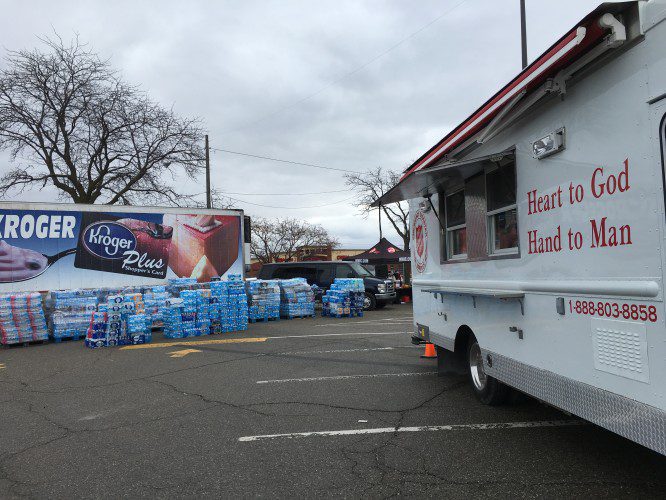 To help address the growing needs of residents impacted by the Flint, Mich., water crisis, The Salvation Army of Genesee County is expanding its service to the community and imploring supporters nationwide to aid in response efforts.

Working in conjunction with other Flint-based service organizations, The Salvation Army is collecting funds to help purchase water, filters and pay delinquent water bills for residents who have received shutoff notifications.

The Salvation Army of Genesee County is currently working with residents in resolving non-Flint water crisis payment issues—at an average of $843 per client—through grants from the CS Mott Foundation and United Way of Genesee County.

“Providing water assistance has been particularly challenging due to the amount of the bills and the lack of funding to provide significant assistance in this area,” said Captain Caleb Senn, Genesee County coordinator. “Many of the water bills that we see are significantly higher than the amount of assistance we can provide. The situation is amplified by the water quality issue and the hold on billing, which have generated an overwhelming number of requests for help.”

Flint’s water first became contaminated in April 2014 when the city switched its main water supply from Detroit Water to the Flint River to cut costs. According to Michigan Health Officials, every child who has drank Flint’s water since then has been exposed to lead. Lead can be especially dangerous for children as it can negatively impact their neurological development.

“[The crisis] is a reminder of why you can’t shortchange basic services that we provide to our people,” President Barack Obama said just days after delivering a Federal State of Emergency in Flint. “And that we provide together as a government to make sure that public health and safety is preserved.”

Last year, The Salvation Army of Genesee County provided nearly $1.4 million in water-related emergency assistance, 68 percent of which went to Flint residents. Flint water crisis utility assistance is an extension of the regular, ongoing support The Army offers to individuals and families in need.

Donations will also be used to provide additional services related to the water crisis in the community as they arise.

The Salvation Army of Genesee County is accepting donations via smartphone by texting “WATER” to 91999.