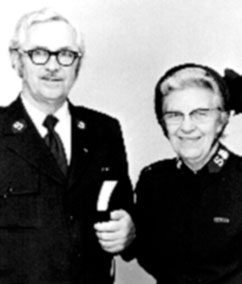 Salvation Army commemorates the 20th anniversary of its return to the Czech republic.

The Salvation Army—which returned to Czechoslovakia in 1990 after 40 years of exile by the Czech government—is celebrating its 20th year of service in that country.

Beginnings
The Army’s presence in Czechoslovakia from 1919 until 1951 was largely due to the work of Josef Korbel (Order of the Founder) and his wife, Erna. Born in 1907 in the capital city of Prague, Josef met the Army at an open-air meeting in 1925. He was so impressed that he entered training school in 1926 and was commissioned a year later to Kladno, where he met and married Erna von Thun.

In 1949—while still serving in Kladno—Josef was arrested. Accused of being “a very dangerous man for his strong religious influence, especially on young people and children,” he spent the next 10 years in prison.

Persecution
Released from prison in 1959, Josef never enjoyed the life of a “free man.” Because of their commitment to God, the family continued to be persecuted. In 1965 the youngest son was shot and killed for asking permission to attend a Good Friday service. The oldest son, Helmuth, was falsely imprisoned in 1966.

Helmuth was released from prison just prior to the Soviet invasion in August 1967. Fearing for their safety, the remaining Korbels fled to Austria. While living in Austria, Josef and Erna were appointed to the Arbon Corps in Switzerland. In 1971 they were transferred to the U.S. Central Territory and retired two years later.

Freedom
The collapse of the communist government across Eastern Europe in 1989 ushered in a dismal year for Czechoslovakia. Soviet rule had taken its toll on the people as well as the country. For 22 years they had been controlled to the point that freedom of choice and freethinking lost all meaning to them—they were no longer able to do either. So rather than experiencing joy at regaining their independence they were left confused, disoriented, fearful and lost.

Recognizing the physical and moral devastation left behind by the Soviet regime, then president Vaclav Havel invited The Salvation Army to return and—led by General Eva Burrows—the Army agreed. However, they did not return to the same country they left 40 years earlier. They returned to a country just emerging from a long sleep and struggling to grab a vision of its own destiny again.

Knowing the task would be a difficult one, Army officers started from the ground up—the basics—by building night shelters and hostels and taking soup to train stations. And although they were meeting physical needs, they were also providing a strong spiritual basis: they brought with them a code of morality and ethics the country had not known for over 20 years.

Challenges
The Salvation Army’s past 20 years in Czechoslovakia has been an up-and-down experience. Slowly growing in its own confidence, it has emerged as a leading source of social care in the country. When the Soviets pulled out, the people wanted change but didn’t know how to change themselves. The Army provided the training and teaching to show them how to do that.

One of the most prevalent contributors to the Army’s slow growth was the almost universal distrust of anyone in a uniform. Another was the people’s inability to think for themselves. Accustomed to being told what to reason and do, they chose to attend churches that taught a more black-and-white legalistic doctrine as opposed to the Army’s teachings of freedom of choice and thinking for themselves. However, there was a remnant that dared to break out of the old mold and become new and self-confident. It was these “rebels” that supported and helped build the Army.

While recognized today as a civic organization in the Czech republic, The Salvation Army is working to become a registered church by the end of 2010.