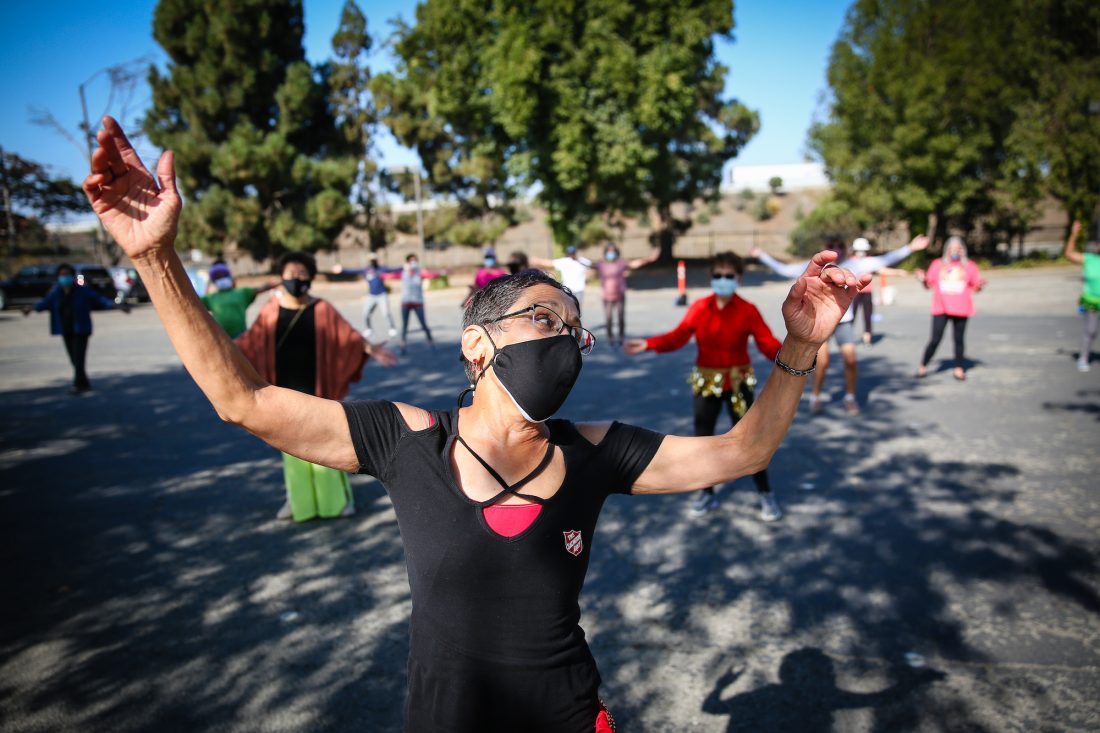 Lately, on Tuesday and Thursday mornings, The Salvation Army Salinas (California) Corps parking lot is full—not so much with cars but with women, mostly seniors, enjoying a Zumba-based dance workout led by volunteer instructor, Naomi Gonzalez.

The outdoor activity highlights the creative problem-solving of Lts. Ezequiel and Katherine Hernandez, who arrived in Salinas for their first appointment as Salvation Army officers in July 2020, in the midst of the pandemic.

Salinas is one of the larger communities in Northern California and the county seat of Monterey County. The appointment surprised the new lieutenants.

“I thought a mistake had been made,” Katherine Hernandez said. “Then, while praying about it, this peace came over me. I heard God telling me, “This is where I want you to be.’”

The Hernandezes learned the corps’ senior programming was particularly successful, with classes ranging from line-dancing to guitar, along with a drop-in center where seniors could come for a meal. 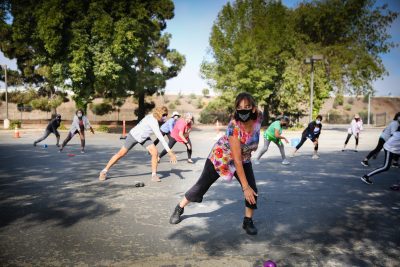 “What surprised us when we arrived was the response of the community—especially the seniors and how much they missed the corps’ programs and just coming to the corps community center to hang out,” Katherine Hernandez said. “They had been stuck in their homes for months, which was especially difficult for those who lived alone.”

For older adults, the effects of social isolation can be especially detrimental. According to the National Council on Aging’s Kathleen Zuke, community organizations—like The Salvation Army—are one of the best sources of help.

The corps was able to continue providing food at drive-through pick-ups, but the Hernandezes wanted to meet the seniors’ need for community. They learned that Gonzalez might be willing to teach a senior fitness class. In September 2020, when Katherine Hernandez met Gonzalez, she pitched the idea of holding the class outdoors in the corps’ parking lot.

Gonzalez agreed, and within days began teaching a weekly class on Thursdays. Twelve women showed up for the first session, but the numbers grew quickly and a Tuesday class was added. About 40 people attend each session, including a few men.

“The response has been amazing,” Hernandez said. “There’s a power in coming together. It’s not just about Sundays; it’s every day. COVID really opened our eyes to what the church can do beyond the four walls…We asked ourselves, ‘What can we do outside?’”

The answer was clear: move the programming outdoors. 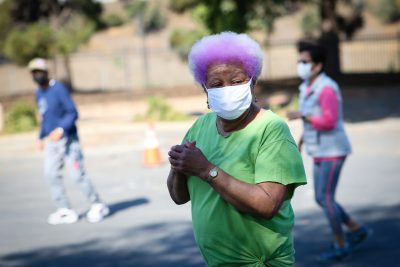 “It’s amazing to see Naomi in her element, and how she interacts with the class,” Hernandez said. “She’s an advocate for living a healthy lifestyle.”

“This is very important as you grow older,” participant Teresa Ortiz said. “The class is also an opportunity to socialize outside your home.”

Gonzalez, herself a grandmother, knows the importance of movement. Teaching the class keeps her in shape both physically and mentally.

“I’m a two-time breast cancer survivor,” Gonzalez said. “Because of that I need to keep moving, and as a petite person, for my bones to be strong and sturdy. And for my memory—chemo affects your memory, as does age. Memorizing the dance moves helps with that.”

Although the pandemic halted those first sessions, the class resumed and is thriving.

“It’s about coming together, too, especially after a year of isolation,” Gonzalez said. The activity attracts attention from residents at two apartment buildings that flank the corps and from people driving by.

“Word of mouth is what’s really responsible for the growth, though,” she said. “I get two to four new people at each class.”

Class member Esther Bench said Gonzalez is an excellent teacher, “Inclusive and encouraging…[and] I appreciate that The Salvation Army let us have class outdoors when all other facilities were closed during the worst of the pandemic.” 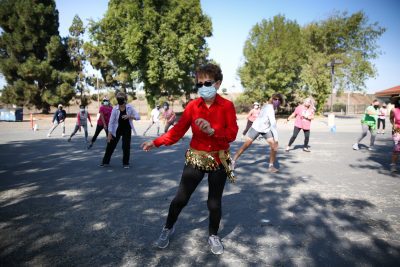 For Jessie Pablo, the experience is about self-expression: “When I’m dancing, I feel myself free and alive.”

Although the class could take place indoors, Gonzalez didn’t want to risk it, especially as attendance increased. She said she sprayed dots in the parking lot, 7–10 feet apart, for people to stand, and everyone wears a mask.

“It’s all for safety,” she said, adding they have had no incidents of exposure to the virus.

Gonzalez credits the Hernandezes, acknowledging they came at a difficult time and haven’t let anything stand in their way.

“This class is a success because of Lts. Hernandez, for believing in me and the class members…because without the members there wouldn’t be a class,” she said. “I am truly grateful.”

As for Gonzalez, she has increased her activity at the corps. She volunteers at the food bank and participates in women’s ministries, and her husband attends the guitar class. They both attend worship services.

“They’re part of the church now,” Hernandez said. “They’ve fallen in love with The Salvation Army and its mission.”