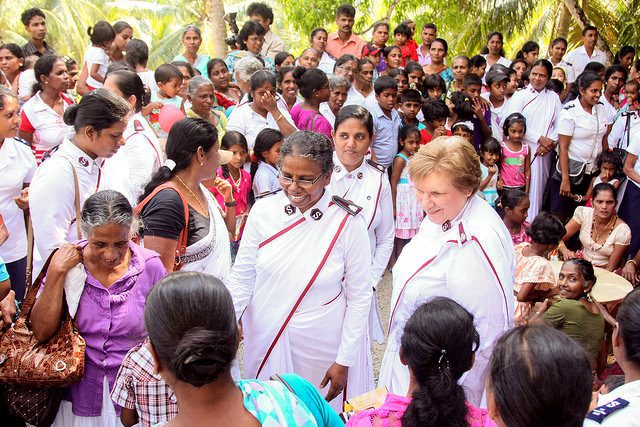 The visit to Sri Lanka by Chief of the Staff Commissioner William Roberts and World Secretary for Women’s Ministries Commissioner Nancy Roberts included public meetings and private gatherings that gave the visitors opportunity to share their experience of the Army’s worldwide mission.

The international leaders had dinner with five heads of churches in Sri Lanka and representatives from the National Christian Council of Sri Lanka, the Bible Society and Colombo Theological Seminary. Rev. Dhiloraj Canagasabey, Bishop of Colombo, talked with enthusiasm about being influenced toward Christ by The Salvation Army when he was a student attending a Salvation Army Sunday school.

William Roberts offered appreciation to the church leaders for the way they work alongside The Salvation Army, and shared about The Salvation Army’s mission and the forthcoming 150th anniversary celebrations, explaining how the International Congress came to have the theme Boundless.

The Robertses visited The Haven, a home for the socially marginalized and the training college in Colombo, and the Booth Tucker Memorial Hall in Rambukkana.

After a brief public meeting in Rambukkana with religious and Government dignitaries, Salvationists and friends marched to Booth Tucker Memorial Hall, accompanied by Kandyan dancers, elephants, flag bearers and Colombo Central Corps Band. In a show of unity and support, the gathering was addressed by the chief incumbent of the Rambukkana Buddhist Temple, Ven Halpitiyae Rathnawansa, Roman Catholic Priest Father Roshan and Deputy Minister of Industries and Commerce, the Hon. A.D. Premadasa. The chairman and vice chairman of Rambukkana Provincial Council also attended.

At a meeting in Booth Tucker Memorial Hall, Nancy Roberts addressed the congregation of more than 1,700 Salvationists and friends, stressing the importance of trusting in God and experiencing him as refuge and fortress.

In his message, William Roberts told the congregation that if God was not with his people they would have got been long ago. He emphasized the command found in Psalm 124: Do not forget God; love him and serve him always.

Roberts later spoke to 350 young people at a youth rally, reminding them that when Jesus called the disciples, they followed in obedience, not stopping to worry what would happen to their work and families. He encouraged the young people to listen to the voice of Jesus and follow him.

At the territorial women’s rally, Nancy Roberts’s message to the 700-strong congregation was to “go to the people, live by example and share God’s boundless love with humanity.”

At the commissioning and ordination of the cadets of the Heralds of Grace Session, William Roberts gave advice to the new officers were, which he said was the same advice given by the apostle Paul to Timothy: stay close to God, preach the gospel and continue to serve God.

In her message, Nancy Roberts encouraged everyone present to be passionate for God. She explained that God gave his begotten son because he was passionate about saving his people. In the same way, she said, we too should show our passion for others by learning and teaching God’s word.

Returning to Colombo, the visitors led officers councils attended by 125 retired and active officers. Shortly before leaving to head to Bangladesh, the Chief and Commissioner Nancy Roberts were interviewed for state TV.