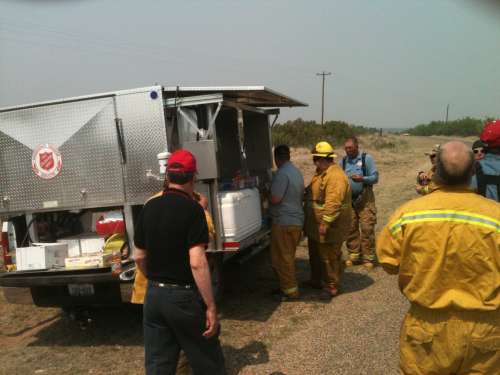 The Salvation Army is actively responding to disasters that have been wreaking havoc across the southern United States over the past several days, including more than 200 tornado reports in multiple states and wildfires. A summary of efforts is found below.

In Oklahoma, local Army units worked around the clock in Tushka, Oklahoma after a deadly tornado hit the area. They worked with the Red Cross and the Choctaw Nation to provide more than 1,000 sandwiches, 500 meals, 1,500 snacks, and dozens of cases of drinks to survivors and first responders. In addition, the Army helped deliver hardware such as tarp material, hammers, and nails.

Tornadoes from a strong super cell thunderstorm also severely damaged Mississippi communities. Salvation Army personnel rotated between two sites in Jackson and another in Clinton to ensure all survivors were served hot meals.  The Salvation Army’s Center of Hope opened its doors to those displaced by the storm. They are currently assessing the damage and planning how to respond to people’s material needs.

North Carolina has declared a state of emergency, following severe storms and tornadoes and at least 22 fatalities. From Charleston, South Carolina to Washington, North Carolina The Salvation Army has activated its network of disaster response operations and resources to serve those impacted. Teams are offering spiritual and emotional care to those who lost homes and loved ones. Additional personnel are serving meals and drinks. Several Family Stores are opening their doors to those who have been left homeless by the storms.

At a twin tornadoes strike site in Virginia, the Army is offering emotional and spiritual care. In addition to serving hundreds of hot meals and bottled water, volunteers and staff have distributed 160 cleaning kits and hundreds of sealable storage containers to families who are cleaning their homes.  The Salvation Army is also giving out gift cards to help people buy housing repair items.

The Salvation Army responded to four separate wildfire outbreaks in southwestern Oklahoma. Officers and volunteers worked into the early morning hours passing out more than 1,000 meals and drinks, as well as 150 hygiene kits. In Lawton, Oklahoma, The Salvation Army is coordinating with the American Red Cross to make sure all needs are met.

A dozen wildfires have consumed more than 500,000 acres across West Texas and destroyed nearly 50 homes. Since April 9, The Salvation Army has served more than 6,500 meals, 8,500 drinks, and 4,800 snacks while providing round-the-clock assistance to firefighters, responders, and residents.