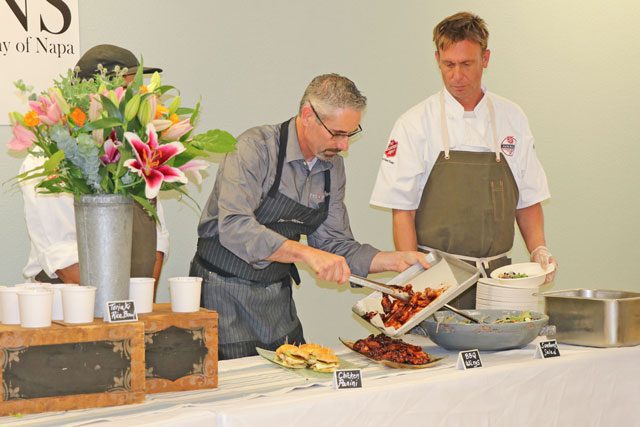 Meals for the customers, opportunity for the cooks

The teriyaki bowl at the Napa, California, Provisions Cafe—tender meat, fresh veggies, fluffy rice topped with a delightfully tangy sauce—draws rave reviews. But there’s something else special about the dish.

Like all of the food at Provisions, it’s prepared in-house by graduates of The Salvation Army Napa Valley Culinary Training Academy, many of whom have fought through homelessness and substance abuse to make a better life for themselves. Provisions officially opened to the public June 17 in a room in the Napa County Health and Human Services (HHS) Agency office building at the county’s South Campus in the Napa Valley Commons.

“Provisions kind of fell in our lap as a result of creating a great relationship with Napa County over the last several years,” said Napa Salvation Army Advisory Board Member Rick Osgood, who’s also a founding member of the Western Territorial Advisory Board. “After the fires we had up here in Northern California, we ended up servicing all of the evacuation centers and we ended up serving some 35,000 meals in the first 10 days after the fires.” Throughout the tragedy, several graduates of the Culinary Training Academy were on hand, helping to cook and coordinate the mass feeding operation through The Salvation Army kitchen in Napa.

“I think after that, the county kind of looked up and said, ‘Wow, these guys really know what they’re doing.’” he said.

According to Napa Corps Officer Lt. Bridget McCort, opening a restaurant like Provisions was part of the plan since the Culinary Training Academy launched in November 2016, but how it actually came together took a little improvising. Napa County officials identified a soon-to-be vacant office in the Commons and approached The Salvation Army with a proposal to open a full-service restaurant there. The establishment would hire cooks from the academy and proceeds from the restaurant would go right back to the school. The opportunity was too good to pass on.

There was just one caveat: they had to take ownership of it in four weeks.

“But through some amazing providence,” she said, they were able to buy themselves a little more time to work out the kinks. “I’ve never seen anything like it.” The ultimate goal is for Provisions to serve as a launchpad for other restaurant jobs in the Napa region. But until then, it’s simply a great opportunity for graduates of the academy to sharpen their skills.

“What the restaurant does for us is give us another training opportunity in the way that we teach at the culinary school,” McCort said. “We can teach ticketing, POS register, substitutions, allergies, being able to customize orders for customers, all of those things.”

In promoting the cafe over the past couple months, McCort said she’s noticed many people are most excited to learn that the profits from the cafe will fully fund the culinary training academy so that there is no cost for participants. “One of the biggest expenses that we have for the training program is housing,” she said. “Napa, like everywhere in California, is just so expensive and we’re committed to keeping housing attached while they’re students. But when they’re then sent out after graduation, they’re usually working an entry level job.”

To help with that adjustment, The Salvation Army is working on opening several transitional housing units, which will also be funded by the cafe.

In the meantime, they’re simply working to get the word out about the new workforce development initiative. Provisions isn’t visible from the street, but the HHS Agency has 600 employees, plus a host of clients who could easily stumble upon it, and they’re working on getting outdoor signage to draw in even more potential customers.

“So far, it’s going great. In that little quadrant of Napa, you’ve got the DMV, a few churches, but there really aren’t any restaurants, fast-food or sit-down,” McCort said. “So I think every day, the number of people that find the cafe is going to go up. It meets a need, not only for the county campus, but also for that section of the community.”