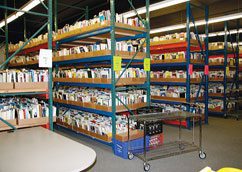 Online book sales turn a profit for the ARCs.

Books at the Portland, Ore., ARC.

Along with the sale of donated clothing and goods in Family Stores, 10 of the Western Territory’s 22 Adult Rehabilitation Centers (ARCs) scan donated books and post those worth a dollar or more on popular websites like amazon.com, alibris.com, half.com and abebooks.com. Three additional centers send sellable books to neighboring ARCs to post online.

Sacramento
Econgo Books began at the Sacramento, Calif., ARC in 2008 as a vision of then administrator Captain Eric Wilkerson, who is now the administrator in Portland, Ore., which operates its own online sales program. Econgo Books generated just over $385,000 of sales in its first year and now sells roughly 8,000 books per month online.

Supervisor James Parrish uploads 400 new books a day to be sold online. Four ARC beneficiaries help in the process: two of the men sort through roughly 5,000 incoming books a day, using a handheld PDA to scan the ISBN to display its worth according to Mediascouter. Books worth a dollar or more move on to two more men who check for markings and process the books, posting comments on any wear-and-tear for potential readers. They generate an online listing for the book and a SKU number. The book is then placed on a virtual bookshelf. Parrish applies a pricing strategy to all the books before uploading them to the websites.

“This has been an experience that I am really proud of,” said Parrish, who built the program in Sacramento. “I know the money goes to a good cause and I’m working with the hardest working gentlemen.

“The key is to keep up with quality control,” Parrish said. “One bad comment out of 100 will hurt you.”

On Amazon, the group is rated “high,” with over 35,000 items currently for sale.

If a book is not sold online after 90 days, it is flushed out, but Parrish said no book is ever thrown into a landfill. For those that are not sold or posted online, some are sent to the stores, others are sold in bulk for $20-50 per 1,000 pounds, and some are sold to paper mills.

Anaheim
Operating in Anaheim, Calif., since 2006, Elistics online book sales completes fulfillment of 450-600 orders a day and monitors an 80,000-piece online inventory with nine female beneficiaries and one employed supervisor.

“I’m here because I’m a recovering addict,” said Carmen Gonzalez, online sales supervisor in Anaheim. “I graduated in 2003, but took on this job two years ago because I feel like I have to give back. I stay here because I have to help these women. We don’t just work here; we also talk because I’ve been where they are. I want to help.”

In addition to books, about 15 percent of the 80,000-piece inventory is comprised of media including records, compact discs and DVDs.

In fiscal year 2009, Elistics sold over $900,000 of items—putting it in the number one slot out of the ARCs that sell online.