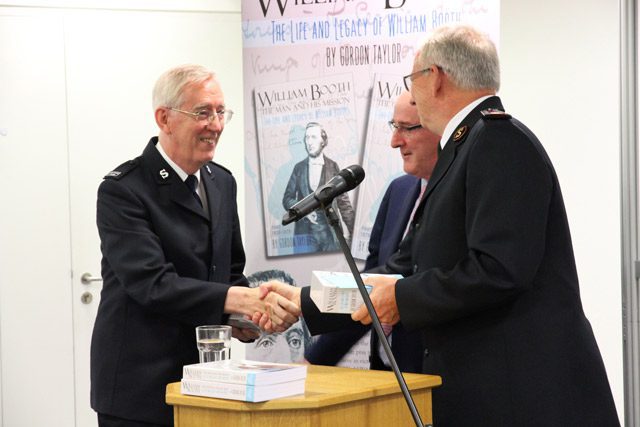 Launching his new two-volume biography of The Salvation Army’s Founder, William Booth, at International Headquarters (IHQ) in London, Gordon Taylor described how—for the past 10-plus years—he has been “living with William Booth,” getting to know the man behind the myths.

A lifelong Salvationist, Taylor explained that an initial “vague notion or passing thought” in 2008 about The Salvation Army publishing something to mark the centenary in 2012 of William Booth’s promotion to Glory was quickly endorsed by then-General Shaw Clifton. At that point, Taylor had been working at The Salvation Army’s International Heritage Centre for 20 years, often helping others who were researching the Army’s founder.

Taylor’s research led him to try to “understand the man,” looking beyond some commonly held views. He discovered much that was new to him and says the books are “shaped by the material I discovered.” Compared to what he thought he knew, Booth’s story was, he admits, “much more complicated; his character much more complex.” He hopes that going back to contemporary sources—when the written word was how most people received their news and information—gives “an immediacy to the narrative,” even to today’s readers. Every source is noted throughout, ensuring that the reader is left in no doubt as to where the information is from.

Thanks was given to IHQ Literary Secretary Paul Mortlock for his many hours of work in preparing the books for publication, to Major Trevor Howes for editing volume one and to Jooles Tostevin-Hobbs for design.

The lunchtime gathering began with contributions from General Brian Peddle and one of his predecessors.

General John Larsson (Ret.) opened in prayer, thanking God “for our heritage…and for William Booth’s vision, courage and inspirational leadership.” He prayed that the new resource would “rekindle in many hearts the fire that burned in William Booth’s heart.”

Offering words of welcome, Peddle acknowledged the support of Taylor’s wife, Hazel. Thanking the author on behalf of The Salvation Army, the General said that the “invaluable insights” contained in Gordon’s “incredible personal accomplishment” are now an important part of The Salvation Army’s historical record.