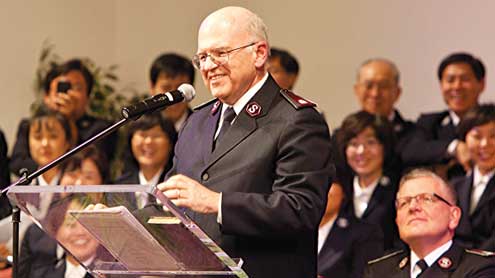 Commissioners Roberts now lead the Army in the U.S.

Commissioner William A. Roberts shared how his overseas experiences affected his perspective. (Photo by Andrew Grey)

Commissioners William A. and Nancy L. Roberts were recently installed as national leaders of The Salvation Army in the United States at a ceremony held at The Salvation Army Mayfair Community Church in Chicago, Ill., conducted by Commissioners Barry C. and E. Sue Swanson, chief of the staff and world secretary for women’s ministries. The full house included several National Headquarters (NHQ) staff, leaders of the four U.S. territories and Commissioners William H. and Ivy Roberts, the new national commander’s parents.

Referencing the Midwestern roots of the Swansons and Roberts, Commissioner Paul R. Seiler, Central territorial commander, remarked on the proud moment for the territory during his welcome.

The Roberts’ daughters, Rebecca and Barbara, gave a tribute on behalf of the entire family, but the national leaders’ 10 grandchildren stole the show as they held flags of the nations in which their grandparents served during their births.

The Chief of the Staff read a letter on behalf of General Shaw Clifton commending the Roberts’ abilities and spiritual giftedness. As sons William and Bramwell held the flags, the Roberts were installed as national commander and national president of women’s ministries. Family patriarch Commissioner William H. Roberts gave the dedication prayer as the Roberts knelt at the mercy seat.

Over the past decade, the Roberts led the South America East Territory, served as international secretary for business administration and secretary for staff development/chaplain at International Headquarters and most recently were the first leaders of the new Kenya West Territory.

Commissioner Nancy Roberts shared how their appointments always surprised them; she wistfully recalled incredible experiences and how the African culture “got into” them. As a reflection of their adventures and personal growth, the national commander read excerpts from the Dr. Seuss book, Oh, the Places You’ll Go.

“We learned there’s another world out there. Every country, every people, belongs to God,” he said. “Christ is still the hope of the world…and holiness is the hope for The Salvation Army.”