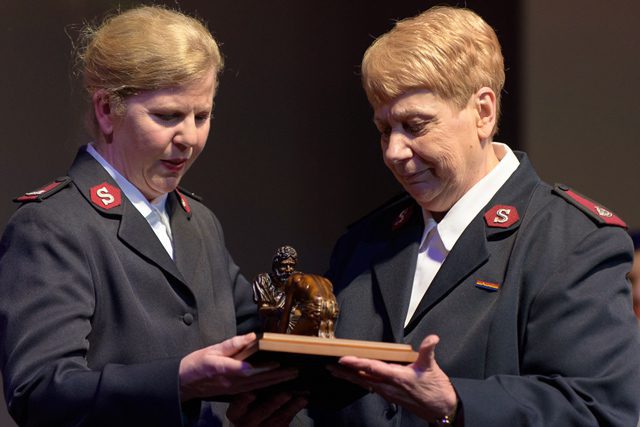 Territorial musical features story of 9/11 chaplain who is attending commissioning events in the West.

MAJOR MOLLY       Brings coffee to the fireman, and the two talk, the fireman overcome with emotion. Fetches basin full of water and soft towels, and slowly removes the fireman’s melted boots, washing his feet.

The scene captures a day etched in memory, and The Salvation Army’s service that followed in individual and collective ways at Ground Zero. Major Molly Shotzberger’s story is one of many portrayed in “Covenant,” a Western Territory musical set for premiere at Boundless – The Whole World Redeeming, July 1-5.

After its first live performance, the cast presented Shotzberger with a statue of Jesus washing his disciples’ feet as depicted in John 13.

“I have a greater understanding of the servant leadership that officers all around the world provide every day—without any spotlights or applause,” said Major Cindy Foley, director of campus services at the College for Officer Training, who plays the role of Major Molly and her service as a chaplain following 9/11. “God provided an opportunity for Major Molly Shotzberger to touch the lives of people who were caught up in a horrific tragedy and she embraced the moment. She became a physical manifestation of the love of God in that moment—a true angel of hope.”

The script—by playwright Karl Larsson, music composer and director Kevin Larsson, and lyricist Commissioner Keith Banks—travels the history of The Salvation Army, in its 150th year, with a series of vignettes that parallel the funeral covenant of Founder William Booth.

Foley said the scene that portrays Major Molly is a reminder for all to be ready to act in the name of Christ.

“This is not my story—it is the Army’s story. It was a team ministry and I was privileged to be part of the team,” Shotzberger said. “Every Salvation Army person who served during 9/11 has a story to tell, so when I heard the foot washing ministry was being included in the international congress musical I felt very humble.”

Karl Larsson said the various self-contained stories in the play are loosely connected by an overarching story revolving around Booth.

“General Booth knows his health is failing, and is worried about the future of the Army. Will it survive beyond him?” Larsson said. “His solution is the mysterious ‘covenant’ we see him working on throughout the show. The contents of that covenant are revealed at the end, and our hope is that the audience will immediately recognize the connection between that very real historical document and the true stories they have just witnessed on stage.”

Shotzberger, who attended the “Covenant” preview today during the Western Territory’s Commissioning weekend, said her hope and prayer is that those who see the play will be inspired to do two things.

“One, make a covenant with the Lord to ‘Pay it Forward.’ If everyone who sees the musical does at least one good deed (doing three would be great) for someone else, and that deed is repeated over and over again, the world will be a much better place,” she said. “Two, while doing the good deed, talk about Jesus.”