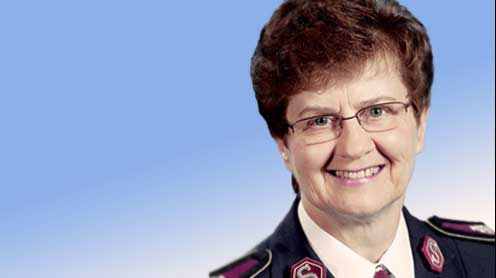 Bond, 64, is the third woman and fourth Canadian to become General.

After her election, Bond spoke to the High Council:

Bond currently serves as territorial commander and territorial president of women’s ministries of the Australia Eastern Territory, a position she has held since 2008. With 42 years of experience in the Army, Bond began serving in the Canada and Bermuda Territory as an officer in her local corps—an ordained minister in the church—in Winnipeg, Canada, in 1969. She became divisional commander in 1993.

Other appointments include divisional commander in the Manchester region of the United Kingdom from 1998 to 1999 and territorial commander of the USA Western Territory from 2002 to 2005. Bond also served at the Army’s International Headquarters (IHQ) in London as under secretary for personnel from 1995 to 1998 and returned as  secretary for spiritual life development and international external relations from 2005 to 2008.

This was the first High Council election that the Army used social media—the High Council website, e-mail, Twitter, Facebook and Flickr—to broadcast information about the proceedings.

The 17th High Council of The Salvation Army, comprised of senior leaders from around the world, met in Sunbury-on-Thames near London to elect a new general. Proceedings began Jan. 21. This was the largest council in Army history with 57 women and 52 men, totaling 109 members.

‘More than a meal’