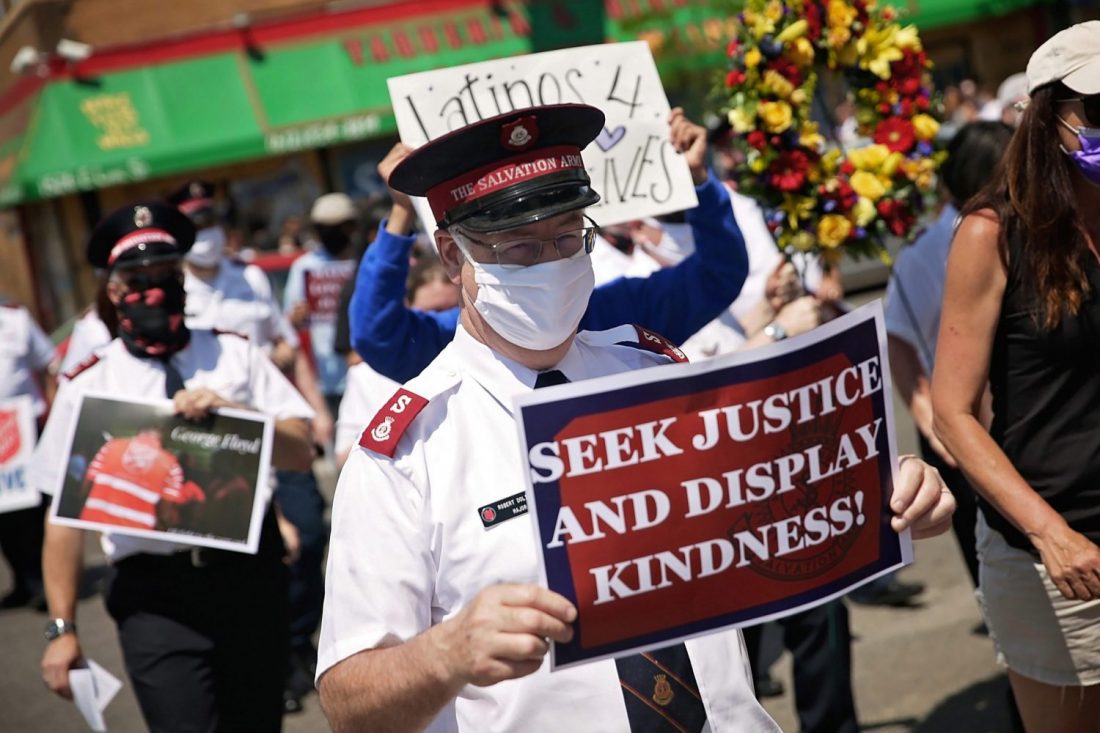 Your kingdom come, your will be done, on earth as in heaven (Matthew 6:10).

For several years I lived in an international community, sharing daily life together for eight weeks with Christian leaders from many countries. During that time, I learned of the grievous suffering and oppression of women around the world. I was not aware of such things before, but my eyes were opened by hearing the stories of these women.

On one departure day, when the leaders with whom I’d shared life were returning to their home contexts, two of the women from South Asia said to me very directly, “Don’t forget us.” In that plea, I understood that they knew I had influence, education and access to power, and they needed me to use my voice on their behalf as I had opportunity.

I have not forgotten them. I received their words as a calling within a calling for my own life— to use my voice, influence and strength for the sake of others, and for the sake of women and girls in particular.

The Salvation Army’s understanding of social justice flows from God’s justice. God desires boundless justice for every part of creation. Justice is for all people, in every part of life, in every society, without discrimination. Righteousness and justice are the foundation of God’s throne (Psalm 97:2).  Jesus Christ personally identified with the poor and marginalized so much so that as much as we care for the hungry, the thirsty, the naked, the lonely, the imprisoned, the sick – we care for Jesus himself (Matthew 25).

And so, we seek justice in order to promote a vision of justice based on the life and teaching of Jesus Christ and to amplify the voices of poor, marginalized and oppressed people and translate their real-life insights into policies, practices and life-giving opportunities.

But why social justice?

What do you think of when you hear the word “justice”? Fairness? Things being set right? Things as they’re meant to be?

The biblical concept of shalom is one of justice—setting wrong things right, nothing missing, nothing broken. Completeness. God’s Kingdom coming on earth, God’s will being done on earth— as it is in heaven.

John Wesley famously said, “There is no holiness apart from social holiness,” indicating that if what we testify to as holiness does not make a difference socially—in our relationships, and in society—then it is not holiness. The same must be said of justice. There is no justice apart from social justice. If what we call justice does not make a difference socially, in society, then it is not justice.

Therefore, in order to truly do “the most good” for the betterment of all, it is crucial to partner together with others in working toward human flourishing. Thus, The Salvation Army, as a founding non-governmental organization (NGO) member of the United Nations (UN), is committed to the UN Sustainable Development Goals (SDGs). These goals include things like: no poverty, zero hunger, good health and well-being, quality education, gender equality and decent work.

Sounds like heaven on earth! I encourage you to read this report describing The Salvation Army’s involvement in these Sustainable Development Goals as an aspect of seeking justice together, to see God’s will being done on earth as it is in heaven.

There are manifold social injustices in our world today. Let’s briefly take a look at just one injustice, to get a sense of the scope of the suffering of others, and the myriad ways one injustice manifests socially—in relationships and societies.

Consider the injustice of gender inequality, which relates to UN SDG 5 Gender Equality. In Africa, the Middle East and Asia, more than 200 million girls and women alive today have experienced female genital mutilation in the 30 countries where the practice is concentrated, according to the World Health Organization (WHO).

Of the estimated 1.3 billion people living in poverty, more than 70 percent are female. Globally, 1 out of 3 women and girls are beaten or sexually abused in her lifetime, according to the UN, and the number one cause of death in teenage girls in low-income countries is pregnancy and childbirth (compounded by child marriages and lack of access to birth control or medical care). Additionally, women have three times more unpaid work than men, and girls have less access to education.

The one injustice of gender inequality does exponential damage to hundreds of millions of human beings on the planet today. The same is true of every injustice to greater or lesser degree, as stated by Dr. Martin Luther King, Jr. in his “Letter from Birmingham Jail”: “Injustice anywhere is a threat to justice everywhere. We are caught in an inescapable network of mutuality, tied in a single garment of destiny. Whatever affects one directly, affects all indirectly.”

What can I do to help?

Please join us in seeking justice together by signing up to receive newsletters from ISJC to keep you informed of key global justice issues to raise your awareness, not only of the injustices, but also of the countless creative, compassionate responses to injustice happening by Salvationists and others around the world.

Specifically, if you’re interested in joining the Fight For Freedom, The Salvation Army’s international response strategy to modern slavery and human trafficking, sign up here.

If you want to advocate on behalf of women and girls, please visit our online resources, Cry For Justice 2020, which includes a succinct summary of specific issues and their impact on women and girls, Bible studies, creative response ideas and ways to pray together on these topics.

If you’d like to join in the Cry 4 Justice 2021, where we will focus monthly on a particular 21st century social justice issue such as racism, sexism, corruption, pornography and more, join us here.

What’s in your hand?

When William Booth became aware of the extent of human suffering in Victorian London’s East End, he exclaimed to his son Bramwell, “Do something!” And they did something. And as part of their legacy of compassionate, redemptive engagement with social justices, this is our time on the earth to do something for the sake of others, especially people who are oppressed and marginalized.

When Jesus wanted to feed the multitudes, he told his friends, “You give them something to eat” (Matthew 14:16). And so a child gave fives loaves of bread and two fish to feed thousands. A laughable offering compared to the great need.

When God called Moses to deliver the Hebrew people from centuries of Egyptian slavery, Moses was asked, “What’s that in your hand?” (Exodus 4:2). All Moses had in his hand was an ordinary tool from his daily life, a shepherd’s staff, which God used to part the Red Sea.

Would you take a minute to pray, and ask Jesus what’s on his heart? And to make clear to you “what is in your hand” for you to offer in seeking justice together?