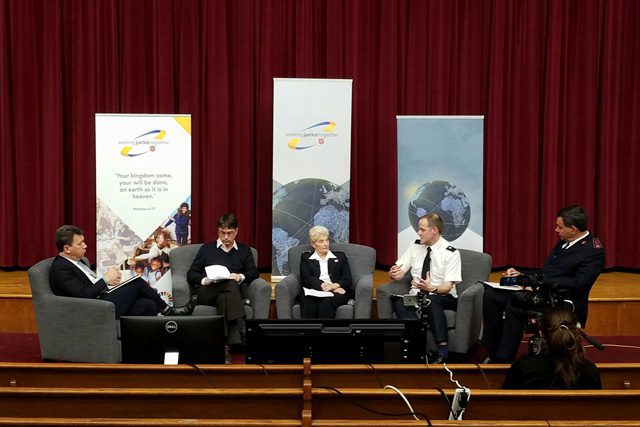 Millions of people are moving around the world each year. Nearly a third of them have been forced to do so, according to the most recent UN Refugee Agency annual report, leaving them vulnerable to persecution and further suffering, and creating a global crisis that cannot be ignored. In 2016, the number of displaced people reached nearly 66 million, the highest it’s been in decades. And 25 million are refugees, people forced out of their homes because of war or conflict, as defined by international law.

How can The Salvation Army respond effectively? And further, how should it do so in a way that honors both the theological legacy and mission of the organization to meet people where they are?

Lt. Colonel Dean Pallant, director of The Salvation Army’s New York-based International Social Justice Commission (ISJC), wanted to explore the complex and often challenging issues that have bubbled up as he’s talked through these questions with other leaders who are actively serving the migrant population in Greece, Italy, Australia, and the United States. In order to convene not only top experts, but also the general public, and to engage with Salvationists around the world, he organized the first-ever Global Interactive Summit on Refugees and Displaced Peoples.

“We thought our role at ISJC was to convene not just Salvationists but outside perspectives to create a community of practice,” Pallant said. “What should we as Christians be saying about the plight of these people? We wanted to work to break down the silos we sometimes work in and connect the dots.”

The online event took place over two days on Jan. 29–30, with six interactive 90-minute sessions hosted and streamed on Facebook Live. More than 22,000 viewers engaged, and more than 800 comments were generated, many in real-time as the conversations were happening. The experts, officers, and leaders were then able to directly respond to those questions as they came through online, allowing for problem-solving and collaboration to take place on a global scale.

To promote further engagement on this important issue, the broadcasts can be played back at facebook.com/salvationarmyisjc, which is accessible whether or not viewers have a Facebook account.

The first session opened with a short video introduction from General André Cox, The Salvation Army’s international leader, who encouraged people around the world to participate in this innovative endeavor. He also shared his concerns about what’s at stake if they don’t.“Fear and hatred of foreigners—and particularly refugees— seems to be growing,” he lamented, “rather than the love and compassion that are more appropriate responses.”

Session topics ranged from “Theology of Migration and Reception,” to “Reflecting on Experience,” and “Tackling Critical Issues.” Salvation Army representatives from International Headquarters and a varied selection of other locations, including Australia, north America, Africa, Hong Kong, the Middle East and Europe—including eastern Europe—shared their experiences and knowledge. 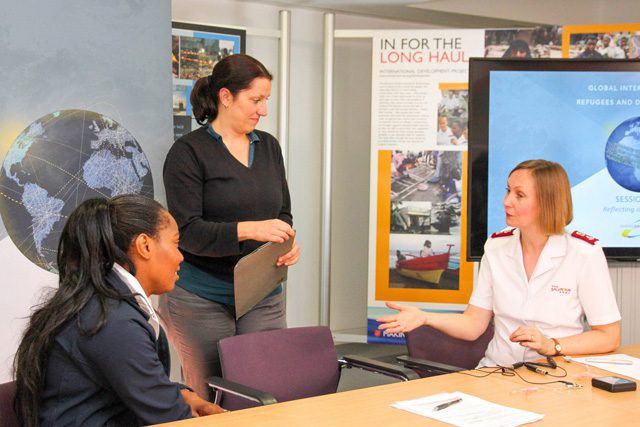 Members of other organizations working with displaced people also provided expertise, including refugee advocate Ahmad Al-Rashid, who himself was a former Syrian refugee; Dr. Mary Jo Reddy from the University of Toronto; and world-renowned writer, theologian and broadcaster the Rev. Dr. Sam Wells.

Cox expressed The Salvation Army’s unwavering support of refugees, a message that resonated throughout the day’s sessions, and also became a hot button topic when it came to changing public perception and garnering government support because migrant, refugee and displaced peoples are often part of a larger political situation.

But where there was a problem, The Salvation Army’s leaders and other passionate experts were ready with an example of a solution. During the fifth session of the summit on “Church-Based Responses,” for example, five practitioners from around the globe shared stories of the remarkable work they’ve been doing welcoming refugees into their communities and churches. During the question and answer section of the talk, the panelists discussed everything from appropriate training for officers and volunteers for migrant response, to coping with shifting public and donor support.

“The issue of welcoming the stranger is not an emergency that will disappear,” said Commissioner Jane Paone from Switzerland. “But our response can be a catalyst for changing public opinion.”

Another experience came from Major Shawn Critch, Divisional Commander of the Prairie Division in Winnipeg, Manitoba, Canada, during the third session on “Working with Governments, Other Faith Groups, and NGOs” chaired by Nick Bryant, BBC’s New York and United Nations correspondent.

“Doing the right thing in this area does carry a reputational risk to us,” he shared in the comments section. “We have faced this in Winnipeg with our asylum seeker response last winter. But it is still the right thing to do.”

As for the other key learnings Pallant hopes participants will take away from the summit?

“My hope is that this will bring people together,” he said. “Stay in touch with each other. Learn lessons. Pray. And if the format works, we hope to have more of these conversations in the future—perhaps on anti-human trafficking or elderly care next. There’s lots of potential.”