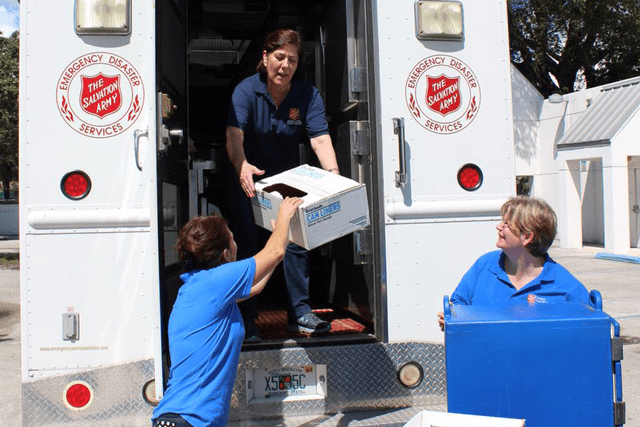 Irma is expected to make landfall as a category 5 storm in Southern Florida on Saturday.

Hurricane Irma has left a trail of destruction in the Caribbean.

The Island of Barbuda is now “barely habitable” according to Prime Minister Gaston Browne. The Salvation Army on nearby Antigua is working with the government to provide emergency food supplies to evacuees who have fled the neighboring island.

Meanwhile, the force of the 185 miles-per-hour wind has blown off scores of roofs on St. Martin, with heavy rain and storm surges inundating many more properties. The Salvation Army’s facilities on the island have sustained modest damage, but they are still providing emergency shelter to at least 37 people who have had to leave their homes.

Territorial Commander Commissioner Mark Tillsley has encouraged Salvation Army personnel throughout the Caribbean to “give attention to those most vulnerable in the communities, and where possible make Salvation Army facilities available for shelter, support and practical assistance.”

While Puerto Rico escaped the worst of the storm and The Salvation Army’s response team could be stood down, meals are being provided in the flood-hit community of St. Thomas on the U.S. Virgin Islands. Cuba, Haiti, and the Dominican Republic remain susceptible to storm damage, along with the Bahamas.

Hurricane Irma is expected to make landfall as a category 5 storm in Southern Florida on Saturday.