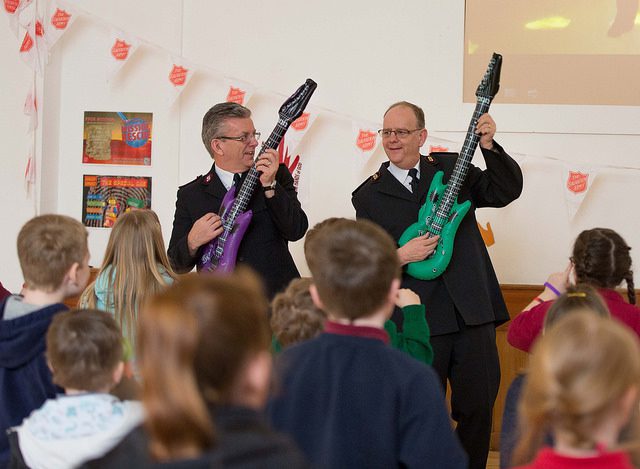 General André Cox encouraged Salvationists in Ireland to “reach up and reach out” during his first public engagement since receiving the all-clear from lung cancer. The General and Commissioner Silvia Cox, world president of women’s ministries visited Belfast to lead the Ireland Division’s 135th anniversary congress. Hundreds of Salvationists and friends attended the event.

The General told congress delegates: “I want Salvationists to reach up in worship and reach out to save souls. These twin themes beautifully capture Jesus’ greatest commandment to love the Lord our God with all our heart, soul and mind, and to love our neighbor as ourself. In gathering together in worship we want to receive from, and respond to, the Lord so that when returning to our homes, our schools and our workplaces we can better serve our neighbor in Jesus’ name.”

He also expressed thanks for the support he has received from Ireland and around the world since getting the all-clear from cancer.

“The support has been overwhelming and humbling,” he said. “People have been writing to Commissioner Silvia and me, telling us that we are the subject of daily prayer. And I can assure you we have sensed this.

“My own doctors have been amazed by my recovery and I owe them a debt of thanks. I also believe my recovery is attributable to prayer.”

The Salvation Army’s work in Ireland began in Belfast in 1880 when Founder William Booth appointed Major Caroline Reynolds to lead the charge. Today there are 19 corps and seven social service centers in the Ireland Division, which is comprised of Northern Ireland and the Republic of Ireland.

The congress began with an adult and family ministries rally at Belfast Temple Corps on Friday afternoon. The program included testimony, drama and music. Commissioner Cox urged the congregation to “go and tell,” using the examples of Mary and Peter after the resurrection of Jesus. She told the rally: “We are to be a voice not an echo; each one has a story to tell.”

Later the General and Commissioner Cox mingled with young people in the Youth Café at Belfast Sydenham before answering questions. The General spoke honestly about how as a young person he had initially resisted the call of God on his life. He urged the young people to submit to God’s will.

A prayer event at Belfast North ran concurrently with the youth event. During this time Salvationists prayed for the congress and every expression of Salvation Army work in Ireland.

The next day, “Ireland Division Celebrates” took place at the Spires Conference Centre, under the twin themes of “Reaching Up” and “Reaching Out.” Delegates explored a variety of exhibition stands, including those representing lifehouses (social services centers) where managers and staff shared information about their centers.

The Saturday evening celebration began with a drama depicting the beginning of Salvation Army work in Ireland. As the lights went up, members of Belfast Citadel stood on the platform representing the vibrant multicultural worshipping community of today. The General and Divisional Commander Major Elwyn Harries received the flags of every corps and center in the division.

The General urged the congregation not to blend in, but to stand out.

“People should know you are a Christian, not by your words or actions but by being yourself,” he said.

On Sunday the General led morning worship at the Spires. In response to the General’s holiness teaching, seekers knelt at the mercy seat in commitment and dedication.

In the afternoon, as the sun shone over Belfast, the General led a march of witness through the city center and then took the salute as row upon row of people marched past.

The final meeting, “Reach out in Celebration” lived up to its theme. United singing companies and the divisional youth band brought an exuberance to the proceedings, as did a children’s song, “Help Me Be Your Eyes, Lord Jesus.” A memorable event from the congress occurred when the General and the divisional commander “rocked out” with inflatable guitars. The congress chorus, with members from all expressions of Salvation Army work, sang “One Mission” and “We Have A Mission.”

Commissioner Cox gave the final thought, urging people to move forward and claim what God has in store. Once again seekers approached the mercy seat.

Compiled from reports by Martin Donegan and Major Paul Wright