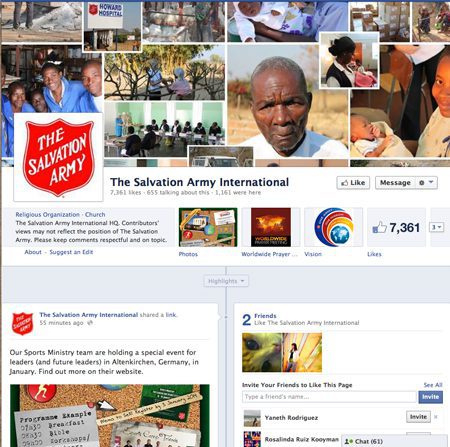 Social media elements of The Salvation Army’s Worldwide Prayer Meeting have caught the eye of the professional panel judging this year’s Christian New Media Awards. The nomination for Most Creative Use of Social Media acknowledges that the weekly prayer meeting takes place in the digital domain via Twitter, Facebook and Google Maps, as well as in more traditional settings such as corps, divisional and territorial headquarters around the world.

The 3,000 Salvationists and friends who have so far registered their commitment to pray span 135 countries – more than have an official Salvation Army presence.

Although the Worldwide Prayer Meeting invites people to pray between 5am and 8am each Thursday, the online activity covers a full 24 hours to ensure that each time zone can be represented. Pray-ers are invited to share their own prayers, prayer requests or Bible verses and encouragement via the website (sar.my/wwpm), Facebook (sar.my/facebook) or Twitter, using the hashtag #WWPM. Prayers are pinned on to a virtual map, clearly demonstrating the global nature of this weekly fixture.

General André Cox, speaking to thousands of Salvationists via a webcast of his welcome meeting, restated the importance of an ‘Army on its knees’. He has also brought specific focus to the Worldwide Prayer Meeting in recent weeks, with calls to prayer for Syria, Pakistan and Kenya.

Among hundreds of entries, www.salvationarmy.org has also been shortlisted in the final six websites in the prestigious People’s Choice category – the only award to be open to a public vote. Readers can find out more about the Awards and register their preference at https://www.newmediacentreofexcellence.org.uk/cnmac/awards/peopleschoice13. Voting concludes on 22 October 2013.

Finally, the website has been nominated for a second consecutive year in the Accessibility category, recognising its commitment to clear design, navigation and language.

The three nominations come ahead of the Christian New Media Conference taking place in London, UK, on 9 November 2013. The annual conference will be attended by a delegation from The Salvation Army’s International Headquarters communications team and features a host of expert speakers, including Rt Rev Richard Chartres, Dr Bex Lewis and Katharine Welby.