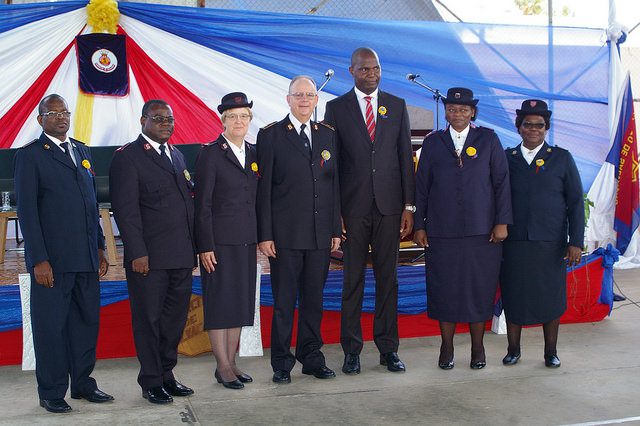 At territorial headquarters, Silvia Cox encouraged everyone to see Jesus in the congress celebrations. The General reminded his listeners that they are not called to positions but to serve others.

The following day, at the official welcome meeting, many soldiers danced and celebrated. The General challenged the congregation to consider what they had done during The Salvation Army’s 100 years in Mozambique. He encouraged his listeners to be part of an Army that will bring change, and challenged them to experience the touch of God and to allow it to make their hearts tender. Twenty-eight seekers responded to the message by praying at the mercy seat. Mozambique is currently facing political unrest and armed violence. Many Salvationists and friends traveling from the north had to pass through areas where military convoys had to be arranged to ensure protection. It was recognized by the General that a large number of Salvationists are poor and had to give sacrificially in order to attend.

The next day, three rallies were held—for men, women and young people. During the women’s rally, which featured heartwarming participation by a variety of delegates, the territorial queen was crowned by Silvia Cox. In her Bible thoughts, Cox challenged the women to count their blessings. “The biggest blessing one can have is to be loved by God,” she said.

During the men’s rally, the General spoke much about holy living. He also called on the men present to treat their families well.

The youth rally featured enthusiastic dancing and other participation from the young people, two of whom interviewed the General. During the General’s Bible address, the young people were encouraged to have a strong relationship with God. He told them that God wants to change the world by first changing the lives of those in attendance at the rally. More than 200 seekers went forward for prayer and 13 new candidates offered themselves for officership.

In an evening festival of praise, the General spoke about the great value of being part of the kingdom of God. He asked delegates if people see the kingdom of Heaven in them. Cox enrolled 32 junior soldiers and 94 senior soldiers.

The governor of Inhambane attended the service and thanked the Army for choosing to hold the congress in his province.

In his Bible message, the General called on delegates to live a different life and hate sin. He challenged them to be part of a revival that will win Mozambique for Jesus. More than 200 seekers responded to the message.