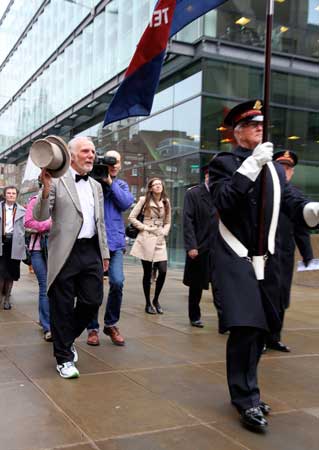 Officers and employees at International Headquarters (IHQ) in London took a break from their work to recognize a remarkable achievement by UK Salvationist Andy Peddle. Accompanied by supporters and friends, Andy arrived at IHQ to cheers and applause before walking 1.3 miles to the headquarters of the United Kingdom Territory with the Republic of Ireland—and a well-earned rest!

On his arrival at territorial headquarters, Andy will have completed an amazing 7,760 miles of walking around the UK and Ireland over 18 months, visiting 601 Salvation Army worship centers. Taking into account his visits to every Salvation Army social center and every league football (soccer) ground, he will have taken his message to about 1,000 locations, raising awareness as well as funds for The Salvation Army’s work with homeless people and its ministry to victims of human trafficking. So far, his efforts have brought in more than $147,000, though he still hopes to reach his target of $160,000.

Welcoming the 70-year-old to IHQ, Commissioner William Cochrane (International Secretary to the Chief of the Staff) described Andy’s efforts as “the most amazing achievement for the most significant ministries of The Salvation Army. Ministries which are right at the heart of who we are.”

Andy has completed his amazing quest wearing top hat and tails. He chose this outfit for a simple reason: so people would notice him!

“If you see someone walking along a country road wearing top hat and tails”’ he said, “it’s going to make you stop and wonder what he’s doing!”

Before leaving IHQ for the final part of his quest, Andy sang “You’ll Never Walk Alone,” just as he has in the 1,000 other venues he has visited. He explained that the song is for homeless people and victims of trafficking—in fact, for everyone who feels they are on their own.
More details of Andy’s Walkathon.