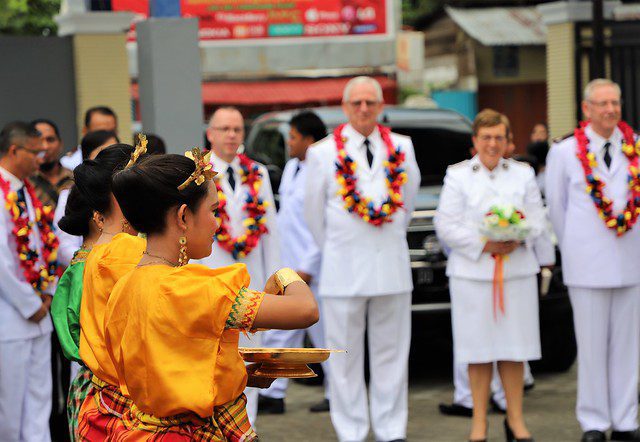 By Kevin and Jane Sandford, Envoys –

Upon arrival at Jakarta’s international airport, the cadets saluted the General with a fervent hallelujah and presented traditional scarves and flowers. 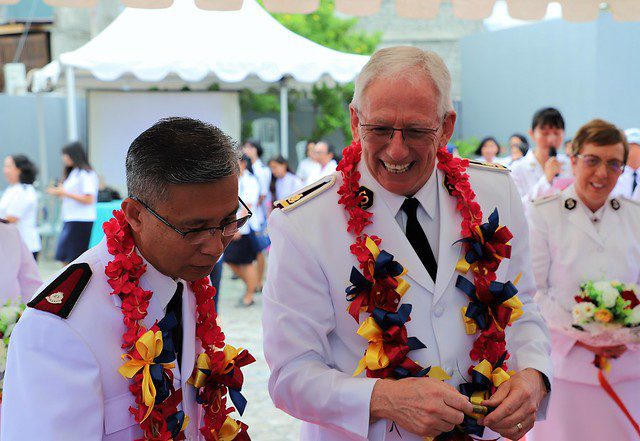 After a damaging 7.5-magnitude earthquake in September 2018, many parts of Palu are being entirely rebuilt. The General showed support and encouragement to the local community and traveled through some of the affected disaster areas to witness the devastation. Captain Susan Assah-Sereh at Jonooge Corps, where the new Salvation Army hall was destroyed, told the international leaders the story of how she and her son survived the earthquake. 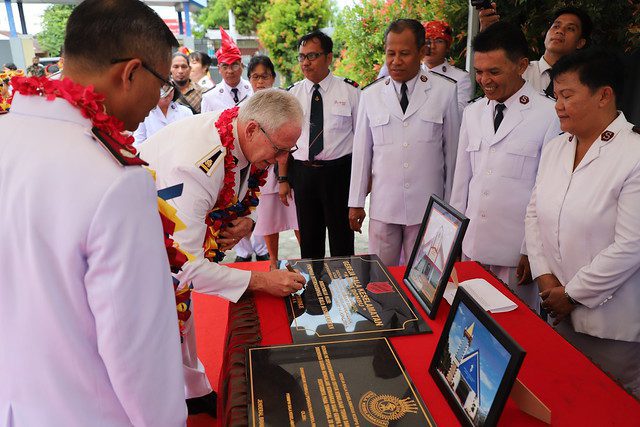 Recording a video message to Salvationists worldwide, the General described Indonesian Salvationists as “people of faith” for whom “it is a long journey to recovery, but the spirit of the people is undaunted!”

Later, the General signed plaques for three corps buildings badly damaged by the earthquake but now refurbished. An evening meal was hosted at The Salvation Army’s Woodward Hospital, which had played an integral part in the early days following the disaster. The hospital provided medical services, including additional mobile clinics to remote villages and trauma counseling sessions for six months. The General expressed thanks for the outstanding work undertaken and difference made to the community.

A huge crowd of some 17,000 Salvationists and friends gathered at a football ground in the nearby village of Maranatha (which, fittingly, is also an Aramaic word meaning “our Lord is coming”). A local Muslim drum band performed and an official welcome was given by Iwan Lapata, Mayor of Sigi, and Dr. Hidayat Lamakarate, representative of the Governor of Central Sulawesi.

Chief Secretary Lt. Colonel Yusak Tampai—himself local to Palu—responded with words of appreciation before the General spoke. The international leaders spoke about working together and interfaith harmony. Acknowledgement was made of Salvation Army service and ministry in Indonesia featuring a 125-strong children’s choir. Testimonies of those who were directly impacted by the earthquake detailed their experiences and testified how God kept them safe.

Sacred moments followed Peddle’s address when the invitation was given to come forward for prayer. People were literally “running towards prayer,” the General later tweeted. “I watched people hold hands and run towards the place of prayer, as not to miss a place to stand and be part of the dedication.” 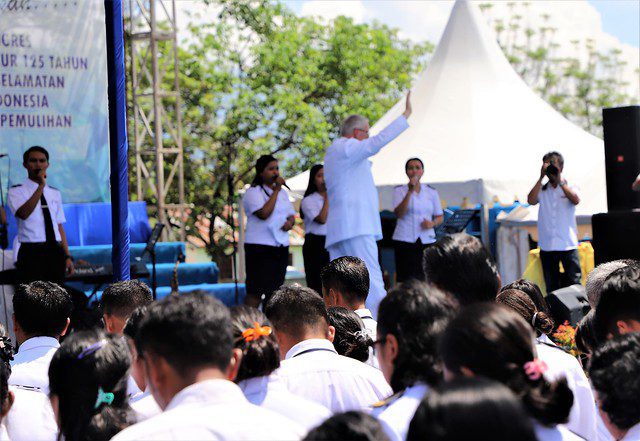 Returning to the Indonesian capital, Jakarta, the international leaders led the commissioning meeting for 32 cadets of the Messengers of Compassion Session in a packed auditorium. Following the Declaration of Faith, the General charged the new lieutenants that “the Spirit of the Lord is on you, and anointing you to preach the good news.” Rosalie Peddle encouraged the new lieutenants saying, “God speaks boldly to all of us to be his people and to live in this world differently, with Jesus modeling compassion.” More than 60 people responded to the Holy Spirit’s leading during an altar call.

In the appointment and sending out meeting that followed, each new lieutenant was welcomed and encouraged with cheers, whistles and beaming faces. Children sang the old chorus “Jesus Wants Me for a Sunbeam” while presenting leaders with a sun-on-a-stick to wave.

The atmosphere in the auditorium was buoyant as the territorial commander announced the “out training” placements for the second-year cadets and later there was an even greater air of expectation as appointments for the new lieutenants were announced. More than 100 young people—newly-commissioned lieutenants, cadets and candidates for forthcoming officer-training—moved forward to declare God’s call on their lives to serve through Salvation Army officership. A further 10 young people registered interest in officership.

In the closing moments, the General thanked officers and soldiers for their faithfulness. He prayed for new leaders to rise up and accept the challenge. Acknowledgement was also made of the service of Commissioners Peter and Jenny Walker, who conclude their time as leaders in the coming days, and of Lt. Colonels Yusak and Widi Tampai as incoming leaders.

“I have every confidence that God will bless the Indonesia Territory under their leadership, and as the next chapter unfolds,” Peddle said.

From The Salvation Army international