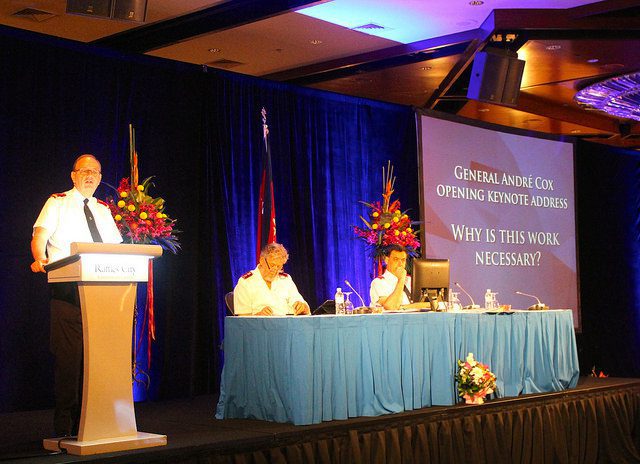 International Conference of Leaders considers key issues for the organization and the Church.

The Salvation Army’s global leadership team met in Singapore July 19-26 for the International Conference of Leaders (ICL) under the direction of General André Cox and Commissioner Silvia Cox, world president of women’s ministries.

Attendees included leaders of The Salvation Army’s 59 territories, commands and regions from around the world, together with commissioners serving at International Headquarters (IHQ), the USA national leaders, and six leaders who will take up new territorial or command appointments following the ICL.

“These are important days during which our discussions will focus on key themes, some having been raised at last year’s pre-High Council conference,”André Cox said at the start of the ICL. “We should not simply sit and listen to the delivery of various presentations, but must grapple with some of the urgent issues facing our Army today.

“We live in challenging times…if the world ever needed the gospel message, it is now,” Cox said.

“It is an honor and privilege to host the conference,”said Colonel Lyndon Buckingham, territorial commander of the Singapore, Malaysia and Myanmar Territory. “In doing so it sends an important message to Salvationists across the territory that they are part of a significant global movement. May God continue to bless and use The Salvation Army today and may he empower and engage his leaders this week as we meet together.”

“We gather today to discuss some of the most complex issues facing the whole Church,”said Cochrane, who also coordinated the conference. “We want this to be a theological reflection coming from our hearts and minds, and we invite Christ and the Holy Spirit to be at the center of our discussions.”The commissioner acknowledged that, while it would not be an easy discussion, “the pressures of life and the pastoral realities we face require us to dialogue on these important issues.”

Following each presentation, delegates met in discussion groups to consider the issues and then reconvened to share their outcomes and recommendations. Two recorders kept detailed minutes, including recommendations for review by the International Management Council.

During the ICL, the Coxes and Buckingham met with President Tony Tan Keng Yam, head of state and president of the Republic of Singapore. The General said it was a “professional and productive meeting, which will help strengthen The Salvation Army’s position and profile in Singaporean society in the days ahead.” They also attended an invitation-only event at the British High Commission in Singapore in recognition of The Salvation Army’s work in the region, hosted by Deputy British High Commissioner Judith Slater.