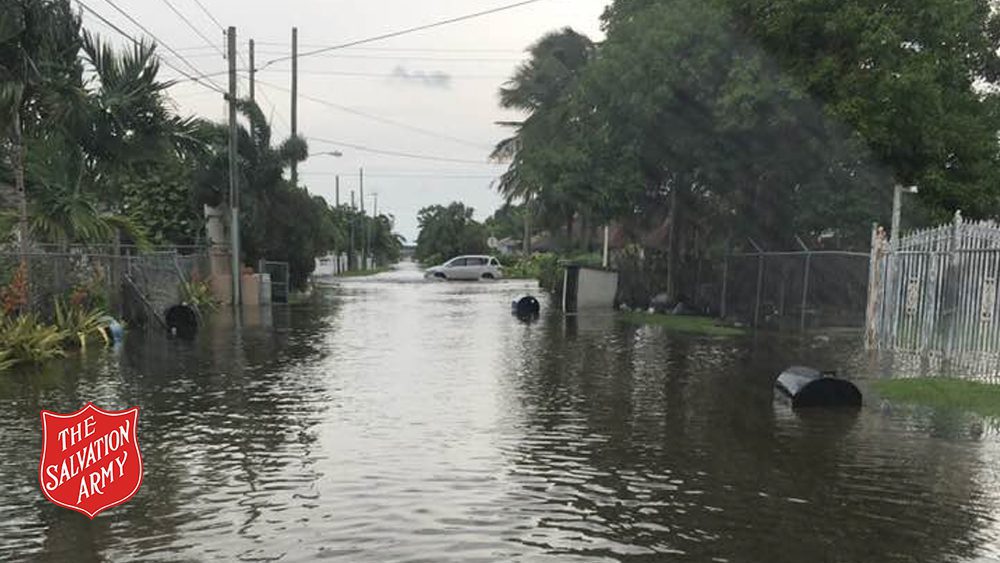 How The Salvation Army is responding to Hurricane Dorian in the Bahamas and U.S.

As much of the Southeastern United States watches and waits to see where Hurricane Dorian will go next, The Salvation Army prepares to serve, starting in the Bahamas, where the then Category 5 storm left severe flooding and damage in its wake.

The Salvation Army’s main base of operations in the Bahamas is in Freeport, and the team there – under divisional leaders Majors Clarence and Karen Ingram – awaits clearance from the Bahamas National Emergency Management Agency (NEMA) to respond.

The Salvation Army was initially requested to provide up to 300 meals a day, but the disaster response team anticipates serving more.

“We are ready to provide assistance as soon as we can assess the need,” said Major Clarence Ingram, The Salvation Army divisional commander in the Bahamas.

The Army anticipates food, clothing, tarps and clean-up kits to be the major needs on Grand Bahama in the days ahead. The island, along with Abaco island to the east, has experienced severe flooding and structural damage as a result of the storm.

Local estimates indicate 13,000 homes may be severely damaged, and the impact may be even higher on Grand Bahama because Freeport is a major population centre. More than 6,750 of the affected residents are ages 65 or over. Compounding the transport, logistics and communications difficulties, the airports on Abaco and Grand Bahama islands are closed because of the storm.

The Salvation Army’s corps building on Eleuthera island also served as an emergency shelter even though conditions in the area were forecasted to be not quite as severe. The last update received from the corps was that the electricity supply failed.

While Dorian was downgraded to a Category 2 hurricane Sept. 3, the current forecasts predict the waters won’t recede sufficiently for nearly another week, making clean-up efforts before that time impossible. It may be another week before the airports on Grand Bahama and Abaco will be able to accept traffic as well.

The last report from The Salvation Army’s corps on Grand Bahama said “Freeport is taking a pounding,” but that the building and associated thrift store are holding up for the time being. Once the situation has stabilized, The Salvation Army’s primary role will be to provide nutritious meals to people in the official shelters.

As Hurricane Dorian progresses slowly, and with a difficult-to-forecast track, Emergency Disaster Services teams are poised to respond in the Southeastern United States. Specialist equipment and trained personnel from across The Salvation Army’s Kentucky and Tennessee Division anticipate deployment, including fully-staffed mobile feeding units. Additional response equipment and personnel in both states have been placed on standby.

“The situation is changing hour by hour,” said Bo Sells, Disaster Services Coordinator for Kentucky and Tennessee. “The current projections call for hundreds of miles of coastal communities at-risk even if the eye [of the storm] doesn’t come ashore…We know we are deploying, but not sure if we are heading to Florida, Georgia or the Carolinas.”

The Salvation Army in Palm Beach County is poised to provide disaster relief services both locally and in surrounding communities as needs arise.

“We have disaster teams ready to serve both our community and our neighbours to the north,” said Major James Hall, Area Commander for The Salvation Army.

The Salvation Army has 30 mobile feeding units positioned across Florida, with each mobile kitchen ready to serve 500-1,500 meals per day. Along with meals, clean-up kits and pastoral counseling will be provided to survivors and first responders.

The Salvation Army continues to work with state and local emergency management officials throughout Florida to determine needs and coordinate resources.

Salvation Army officers and staff throughout Georgia have met with local community leadership to help in evacuation efforts. With seven emergency shelters open across the state, The Salvation Army has been providing meals, snacks and drinks to first responders and others who are aiding in the evacuations.

The Salvation Army has 21 mobile feeding units available in Georgia, which can be stationed to quickly provide feeding, hydration and emotional and spiritual care to impacted areas. A Salvation Army Incident Management Team stands ready to go into action to organize and coordinate relief efforts should Hurricane Dorian impact Georgia.

“We continue to assess and evaluate the situation,” said Lanita Lloyd, Director of Emergency Disaster Services for The Salvation Army of Georgia. “Once we see exactly if and how Hurricane Dorian impacts our state, we will be able to deploy our resources as needed to help those in the most severely affected areas.”

Preparations for disaster services are being made after a mandatory evacuation was ordered for coastal counties in South Carolina. Salvation Army units will provide local support for first responders, emergency management officials and residents who are in the predicted path of the storm.

In Raleigh, North Carolina, and Columbia, South Carolina, Salvation Army liaisons have been dispatched to the state emergency operations center to coordinate with other agencies and government partners.

“We are part of the solution,” said Mike Patterson, Emergency Disaster Services Director for The Salvation Army of the Carolinas. “One organization cannot do it all, but serving together we can use our strengths to help people when disaster strikes.”