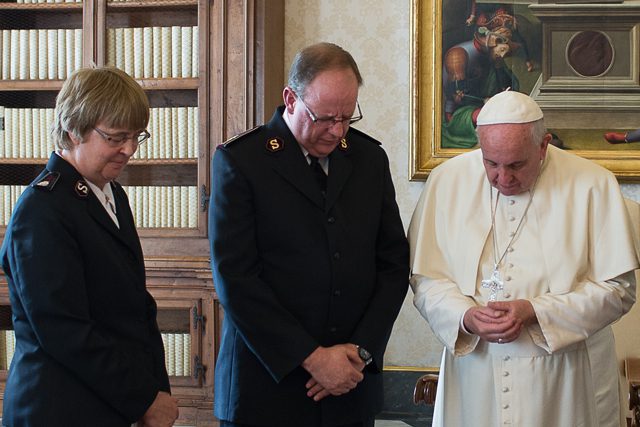 General Cox and Pope Francis meet at the Vatican

General André Cox and Pope Francis pray together in the first-ever private meeting between leaders of The Salvation Army and the Catholic Church, flanked by Commissioner Silvia Cox (left).

The first-ever private meeting between a General of The Salvation Army and a Pope occurred Dec. 12 at the Vatican with General André Cox and Pope Francis as the culmination of conversations held between Salvation Army and Vatican representatives from 2007 to 2012 that are newly published in “Conversations with the Catholic Church” (Salvation Books, 2014).

“He listened attentively to the greetings brought by the General, which underlined the many things uniting Catholics and Salvationists and spoke of the experiences of cooperation between priests and Salvation Army officers in many areas of the world,” Tursi said.

In his greeting, the Pope underlined that theological differences between The Salvation Army and the Roman Catholic Church had not impeded the witness of a united sharing of the love of God and neighbor. He described the two as often meeting “in the same peripheries of society” and described the work of The Salvation Army enabling “Christ’s light to shine in the darkest recesses of [people’s] lives.”

He spontaneously interrupted the reading of his greeting to share an experience of his childhood in Argentina in a time when Protestants were seen as “bad people who would go to Hell.” He was 4 and walking with his grandmother when he saw two Salvation Army women dressed in uniform with “those strange hats.” He asked his grandmother if they were nuns or sisters and she replied, “No, they are Protestants, but they are good.”

“This was the first sermon ever I heard about ecumenism, and [it] has influenced me in my ecumenical walk,” Francis said.

In his address to the Pope, Francis said, “Your commitment in the fight against poverty, injustice and corruption is something that resonates strongly in the hearts of Salvationists. Speaking entirely personally, this aligns completely with my own deeply held convictions. Like you, Salvationists firmly believe that the Church, being the body of Christ, must reflect the mind of Christ. As such, we should be a welcoming community that in practical ways exerts a redemptive presence within God’s good, though fallen, creation.”

Cox also presented the Pope with a copy of “Conversations with the Catholic Church” and “The Salvation Army Year Book 2015.”

“The Pope concluded his message with a request to be remembered in prayer, and it was a moving moment when the Pope reminded the General of this request, to which General Cox offered to pray right there,” Tursi said. “The Pope gratefully accepted this kind offer before reciprocating, praying for the General in his leadership of The Salvation Army.”

The two leaders spent a few moments in private conversation before concluding the meeting.