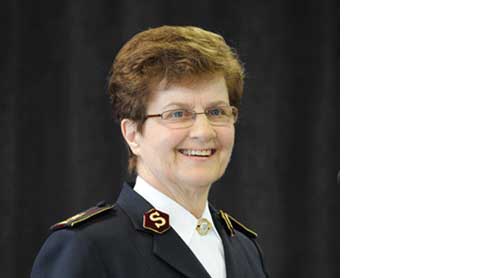 The Chief of the Staff, Commissioner André Cox, writes:

‘FOLLOWING a period of personal reflection and prayer, General Linda Bond has decided that she should relinquish the Office of the General with effect from 13 June 2013. The General’s decision to step down comes after 44 years of ministry.’

As is required by The Salvation Army’s constitution, contained in the Salvation Army Act 1980, the Chief of the Staff will perform the functions of the General pending the election of a new international leader.

The Chief will also shortly be calling a High Council to elect the new General. A further announcement regarding that High Council will be made in due course.

General Bond, who holds a Bachelor’s degree in Religious Education and a Master’s degree in Theological Studies, entered the training college in Canada as a cadet in 1967 and was commissioned as an officer two years later. She spent the following nine years in corps appointments, before being appointed first as a member of the training staff at the College for Officer Training in Toronto and then as Territorial Candidates Secretary. She returned to corps ministry, becoming Commanding Officer of the Kitchener Corps, before serving at the College for Officer Training in St John’s, Newfoundland, as Assistant Training Principal, Divisional Secretary of the Maritime Division and Divisional Commander of the same division.

In 1995 she was appointed to International Headquarters in London as Under Secretary for Personnel. She remained in the United Kingdom, transferring to the UK Territory as Divisional Commander, Central North Division, in 1998. A return to Canada came just over a year later, when she was appointed as Chief Secretary, Canada and Bermuda Territory.

In July 2002 she was appointed to the USA Western Territory, where she served as Territorial Commander and Territorial President of Women’s Ministries. She returned to International Headquarters in 2005, as Secretary for Spiritual Life Development and International External Relations.

In 2008 she became Territorial Commander of the Australia Eastern Territory. She was elected to The Salvation Army’s most senior office in January 2011.

The Chief concludes: ‘We pray God’s blessing upon General Linda Bond as she enters retirement.’