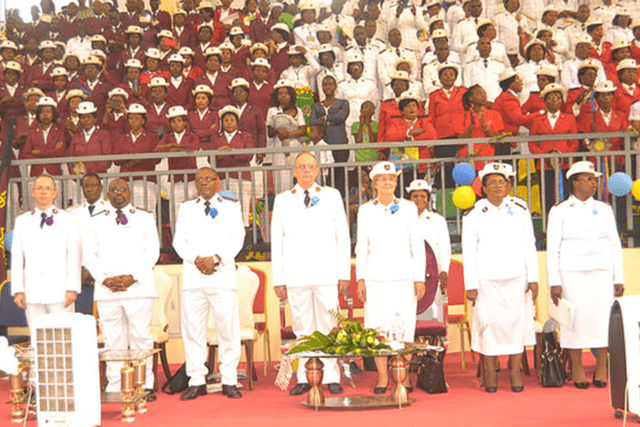 Upon arriving at Maya-Maya International Airport, the General spoke to the Congolese media. He explained that he was in the Republic of Congo to support and encourage the country’s Salvationists and to preach the gospel of Jesus Christ.

Joining Congolese Salvationists and friends at the opening meeting of the congress, held at the Fiftieth Anniversary Hall, were delegations from Gabon, the Democratic Republic of Congo and Cameroon, as well as government officials and other members of the Christian Churches Ecumenical Council. During a “rally of Salvationists” two days later at the same location, the General recognized seven Salvationists for their commitment and loyalty to God and to the Army. More than 4,500 Salvationists and friends welcomed General André Cox and Commissioner Silvia Cox (World President of Women’s Ministries) to the Congo (Brazzaville) Territory for the 80th anniversary congress. During the Congress, the General enrolled more than 700 senior and junior soldiers.

Over 5,000 people attended a women’s rally led by Commissioner Cox while the General led a congregation of 1,325 at a men’s rally. A music festival later in the day included the cutting of an 80th anniversary cake.

The fifth day of the congress, Sunday, began with a public march of witness followed by the Congress Celebration Holiness Meeting at Henri Elendé Arena. More than 13,000 people attended the meeting, during which the General enrolled 456 senior soldiers and 277 junior soldiers. Two of the new senior soldiers are members of the Congolese Parliament.

Throughout the congress, thousands of people reconsecrated themselves to God at the mercy seat, and many dozens of first-time seekers were registered. Fifty-three individuals responded to the call of God to officership in The Salvation Army.

In addition to main congress events, the international leaders participated in officers councils attended by 350 officers (active and retired) including some from the Democratic Republic of Congo. They also met with the cadets at the training college and dedicated to God a new 1,500-seat hall at Ngangouoni in Brazzaville 2 Division.