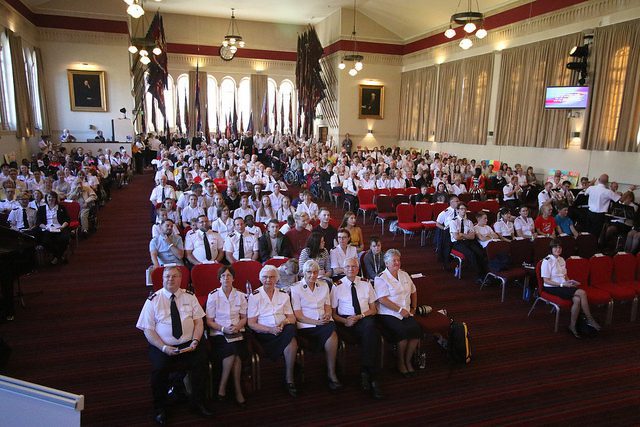 General Brian Peddle and Commissioner Rosalie Peddle, World President of Women’s Ministries, recently joined more than 600 officers, cadets, soldiers and friends of The Salvation Army at William Booth College for the South London Divisional Celebration. The Peddles are soldiers at a corps in the division and took part as friends and fellow soldiers, not just as world leaders. 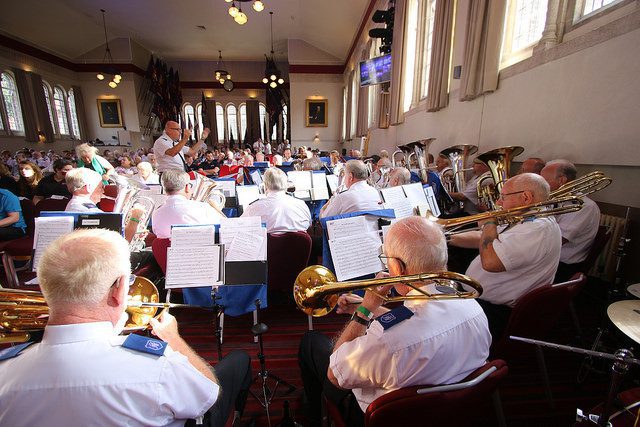 Celebrations began not with a fanfare but with the contemplative words “my hope is built on nothing less than Jesus’ blood and righteousness,” as delegates gathered for a Friday evening prayer meeting, conducted by Major Susan Woodgate (divisional headquarters) and Captain Sheila Westlake (St Mary Cray). After inviting the congregation to “be one in this place,” Divisional Commander Major Val Mylechreest implored everyone to follow God’s calling.

The sun shone on the Peddles as they opened Saturday celebrations. A wide range of activities and Army literature were available as the world leaders mingled with delegates, sharing with people from around the division and further afield. Workshops included the opportunity to sing with Staines Songsters, play with the South London Fellowship Band, experience “Singing by Heart,” engage in drama, dance, and be part of the Kids and Youth Choir with Bexleyheath Singing Company. Godly Play, seminars for local officers, live art, “knit and knatter,” arts and crafts, inflatables and games were also included in the day.

The afternoon celebration meeting began with the General and Commissioner Peddle marching into the assembly hall. The commissioner said they were there not only to lead but also to “receive the inspiration of God.” The division then formally introduced itself as, one by one, representatives from every corps stepped forward to shake hands with the international leaders. The congregation represented the many cultures, ethnicities and Army backgrounds from across the world living in and around south London.

In his message the General called for The Salvation Army to live a life of intimacy with the Almighty. He exhorted the congregation to remain as one in God “so that people ask what makes the difference in your life.”

During the Sunday morning holiness meeting, Rosalie Peddle gave a clear call to be one in Christ and live a holy life. Later, the divisional commander asked the division to enter into a covenant of prayer for the world leaders, to which hundreds of people responded. The meetings were supported by Bexleyheath young people, Croydon Songsters, Bromley Band and David Cotterill (Lewisham Fresh Expressions) and a worship group. 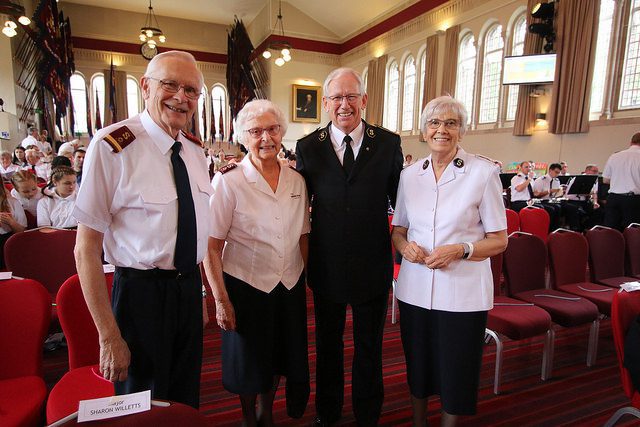 Celebrations culminated in an afternoon gathering led by Major Ian Woodgate, Divisional Officer for Leader Development. The meeting included a time of thanks for those who serve the division—including employees, retired officers, volunteers, local officers and more—and the farewell to two candidates for officership. Rosalie Peddle welcomed a new member to the Silver Star Fellowship, and Commissioner Freda Larsson was thanked for her role as president of the South London Retired Officers Fellowship.

In his final message of the weekend, the General asked what the Spirit might be saying to the Church. He spoke about his vision for what The Salvation Army will be like at the end of his term of office, saying that he hopes for “one Army, stronger than we are now.” This, he said, is how God’s blessed Army will change communities, families and lives.

More than 50 people knelt at the mercy seat over the weekend, with many others responding to the prompting of the Holy Spirit where they sat. The celebration concluded with a glory march and conga.