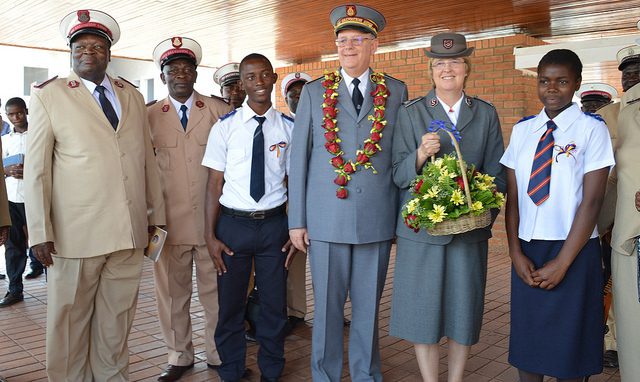 Around 500 Salvationists and friends welcomed General André Cox and Commissioner Silvia Cox (World President of Women’s Ministries) at Malawi’s Chileka International Airport as the international leaders arrived for commissioning and congress meetings. This was their first visit to the country, although they have lived elsewhere in Africa. The General challenged those gathered to be ready for God to speak to them during the five days of celebration, dedication and fellowship. High on the hill overlooking the community in Bangwe, the General opened and dedicated the newly-built corps hall before a large group of Salvationists and community members. He called upon corps members to respect the new facility by looking after it and using it for the purpose it was built—saving souls and transforming lives. The General noted that the building could be seen from a distance and that the ministry of this corps should be a beacon for the whole community. After he cut the ribbon and unlocked the door, the hall filled to capacity for the celebration meeting that followed. At another area of the large property, the international leaders learned of the plans that the Malawi Territory has for the site. Project Officer Narelle Gurney explained that this property is ideal for integrated mission. The vision, she said, is to be truly integrated with the surrounding community so the presence of God may be revealed.

Several hundred people knelt at the mercy seat in response to the General’s Bible message at the Saturday night celebration. The presence of the Holy Spirit was evident as people walked among those who were kneeling to pray with them. Some who could not speak the local language simply laid hands on people and prayed as they moved among the crowd. On Sunday morning the General ordained and commissioned 14 new Salvation Army officers. He then enrolled 142 senior soldiers and 105 junior soldiers. Thirty people responded to a call to officership.

The Mayor of Blantyre, Mr. Wild Ndipo, attended the Sunday meetings. He had received the General and Commissioner Cox in his mayoral office a few days earlier.

A South Africa Territory Women’s Band, a six-piece brass group from Canada, and the Malawi Territorial Band provided music during the meetings.

Throughout the visit, the General exhorted Salvationists to be “people of integrity who would go out into the world to do war against poverty, against exclusion and against sin in the world.”