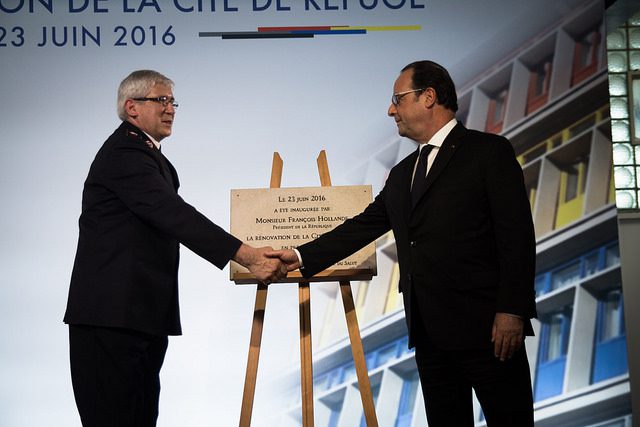 Initially inaugurated in 1933, in the presence of then president of France, Albert Lebrun, La Cité de Refuge can now house up to 143 people, including families. Residents are assisted in a search for long-term housing and are offered training, employment and education opportunities.

Territorial Commander Colonel Daniel Naud welcomed attendees before Hollande opened the building, toured the facilities and met residents. In his remarks, Hollande spoke of the “necessity to fight” for a united, generous nation that works with organizations such as The Salvation Army to “protect human dignity.”

The building is one of only two in Paris designed by the famous architect Le Corbusier, considered a father of modern architecture. Projects to house people living in slum conditions became an important part of his life and work but La Cité de Refuge—designed in conjunction with his cousin, Pierre Jeanneret—was Le Corbusier’s first scheme for the “urban poor.”

The Paris Update reported on the three-year renovation in February, revealing that “many features of the original building were rediscovered when walls that had been added over the years were knocked down, opening up generous spaces and revealing such thoughtful details as a small terrace with a light-colored wall positioned to reflect light into the room on a gloomy day.”