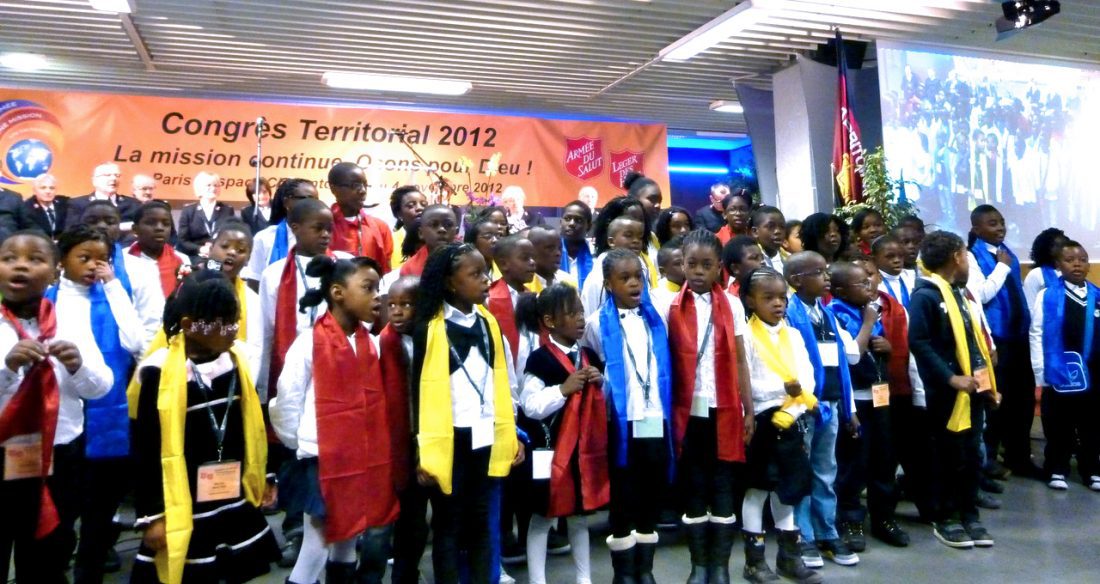 THE France and Belgium Territorial Congress – held in Paris, France – was a significant event, being the first such gathering since the two countries were brought together into a single territory in January 2009. Guest leaders for the event, which drew crowds of more than 1,000 people, were the Chief of the Staff (Commissioner Barry C. Swanson) and Commissioner Sue Swanson (World President of Women’s Ministries). The congress theme was ‘The Mission Continues: Let’s Dare for God!’

On arrival everyone received a jigsaw puzzle piece symbolising that, while each person is part a bigger picture, everyone is important and all must fit together. Congregation members at the Friday evening welcome meeting were encouraged to ask themselves: ‘What is my place in the mission?’ Territorial Commander Colonel Massimo Paone invited each person to take his or her place in this mission, and to dare for God.

The evening included Powerpoint presentations that provided an overview of all aspects of the Army’s ministry – social and spiritual – in Belgium and the five regions of France. In his Bible address the Chief of the Staff emphasised that ‘commitment is not real if it does not lead to the mission of announcing the good news of Jesus Christ’.

Saturday morning included something for all the family. Women shared with Commissioner Sue Swanson in an informal cabaret-style gathering, being challenged to be women of God, praising him in their daily lives and reaching out to others at whatever stage of their lives they might be. Women were moved as they heard about Commissioner Swanson’s personal experience, as well as hearing testimonies from two other women of contrasting ages. At the conclusion of a Bible study on the life of Miriam a number of women stood up to answer a call to be women who influence others for God’s glory.

In an adjacent room men appreciated the Bible study especially prepared for them, while children were enthusiastically entering into their activities in another hall.

Congress delegates were able to attend workshops on a variety of subjects. A highlight of the day was the plenary session, at which the directors for programme and the director general gave presentations on the extensive social work in France carried out through The Salvation Army Foundation.

Later more than 50 young people from Belgium presented a musical entitled MC, written and directed by Major Joël Etcheverry. The show, which told the story of ‘MC’ (the initials of the protagonist), gave a poignant plea for pardon and the demonstration of what God can do in the heart of one man. During the ‘After Ten’ youth meeting a number of young people went forward for prayer.

Sunday’s challenge was to ‘Prepare our Hearts for the Mission’, with the Chief of the Staff’s Bible message centring on the transfiguration and the importance of focusing only on Jesus. People streamed forward to the place of prayer in response to the Chief’s invitation.

In the final meeting, ‘Working Together to Continue the Mission’, Commissioner Sue Swanson insisted that, as in the parable of the great feast, ‘and still there is room!’ We are called to be servants who have no shame in inviting others to come to Christ’s banquet.

The territory’s eight officer-cadets were invited to the platform and an appeal was given for people to offer for officership. Five young people went to join the group of cadets. Recently enrolled senior and junior soldiers were also invited to the platform and took their place, along with adherent members, in a visual testimony to the fact that The Salvation Army’s mission continues in France and Belgium.

Worship throughout the congress was enriched by vibrant testimonies from young people and by music items from the territorial band, a children’s choir, corps (church) singing groups, a large united timbrel group and the congress choir, which sang for the first time the French translation of the song ‘One Army, One Mission, One Message’.