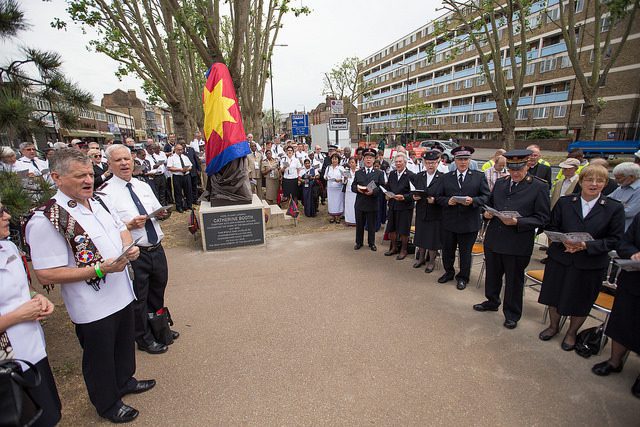 Leaders of The Salvation Army from across the world met on Mile End Road in the East End of London July 2 to commemorate Founders’ Day and unveil a statue of the Army Mother, Catherine Booth, next to one of William Booth erected in 1979.

“This is a special day as we recognize the remarkable contributions Catherine Booth had in shaping The Salvation Army to be what it is today,” said General André Cox in welcoming attendees—Army officers, local religious leaders, city workers and Booth family members alike.

Known for her partnership in beginning the ministry that would become The Salvation Army 150 years ago, Catherine Booth is heralded today for advocating for women’s equal right to preach.

The statue, a depiction of Catherine in bonnet, hand extended and clutching a Bible to her chest, was funded by women of The Salvation Army in the United States.

“One of the things that attracted me to the Army at age 11 was that both of the [male and female] officers were ordained and spoke at the corps,” said Commissioner Debora Bell, USA Southern Territorial President of Women’s Ministries. “I felt a calling to be a woman preacher. Because of what Catherine did, I can do what I do.”

Down the road, past the Blind Beggar public house where William held street meetings, a tent meeting at Vallance Gardens, a disused Quaker burial ground, recreated the earliest form of Army ministry with songs, testimonies and a message by  Chief of the Staff Commissioner William Roberts.

“We can celebrate what is happening today in the East End,” said Major Nick Coke, corps officer of the nearby Stepney Corps, which he and Major Kerry Coke started 12 years ago. “The Founder said he found his destiny in the East End and I’ve felt a little of that, too.”

Ashley Green, a cadet in the United Kingdom Territory with the Republic of Ireland from Stepney Corps, said the Cokes embody Booth’s vision for the Army’s mission, particularly for building relationships with the community that is largely Muslim today.

“I want to be an officer who is intentional about getting to know people, too,” Green said. “Here it’s a religious difference, but in some places it might be age or something else. I want to be willing to reinvent what needs to be done to reach people.”

“The Salvation Army is well positioned today in what God is doing in society,” he said. “For me, this is not so much about looking back but is a chance to look with great expectation at what God has in store in the next 150 years.”