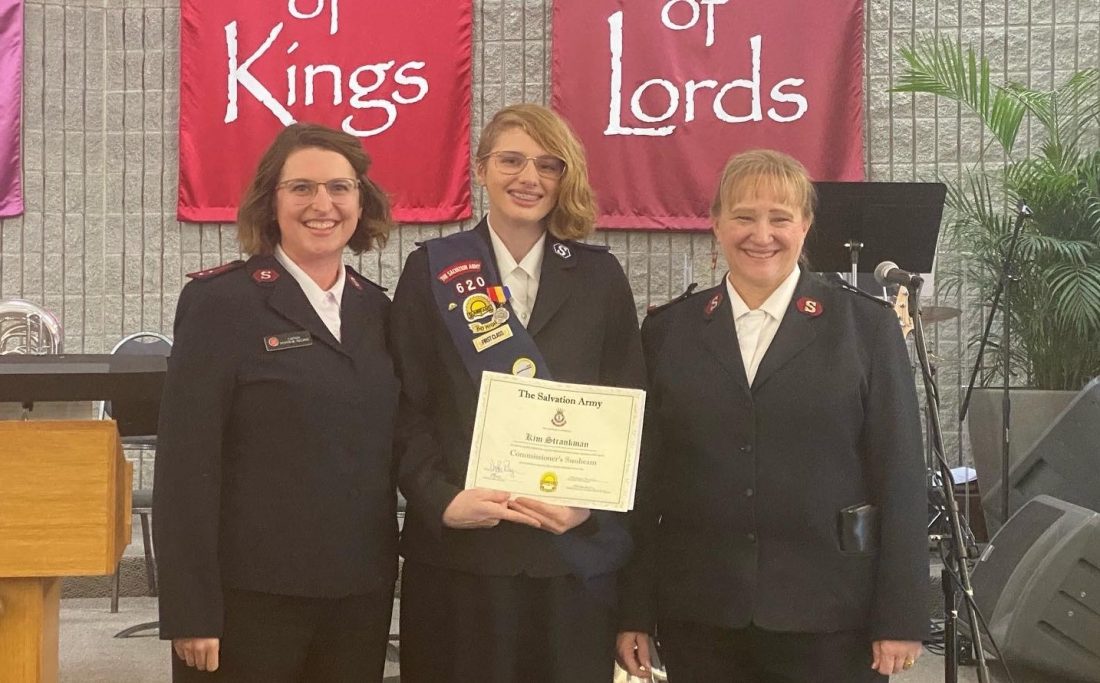 One woman’s testimony shows how community involvement, shared faith, and perseverance can lead to acclaimed accomplishments.

The program, made for girls in first through fifth grade, provides opportunities for social and spiritual formation. Similar to Girl Scouts, Sunbeams can earn badges related to a variety of life and survival skills.

The highest achievement possible for Sunbeams is the Commissioner Sunbeam award. To achieve this award, a Sunbeam must complete 11 required badges plus an additional two badges of her choice, be tested by a review board, and approved by the Divisional and Territorial Headquarters.

While the Commissioner Sunbeam award is typically reserved for young girls, former Sunbeam Kimberly Strankman’s personal testimony led to her receiving the award exactly a decade later, while in her twenties.

“In the beginning, I was a pretty happy child,” Strankman shared. “I grew up in the church,” she added, mentioning how her parents got involved as local church leaders. She fondly recalled attending church events and summer camp each year.

“But home life was different from church life. There was a lot of fighting,” Strankman said. At home, she said her sister struggled with disabilities and her father with anger issues, which left Strankman and her mother in the middle.

“When I was 8 years old, I overdosed on medication. I was dealing with a lot and my parents had treated everything with medication,” Strankman said. She ended up overdosing at school which resulted in a week-long hospital stay.

Child Protective Services stepped in and decided it would be better for Strankman to be removed from her home and entered into the foster care system. “It was scary and hard and I was hurt…I didn’t understand what was happening. It put a strain on my relationship with God.”

Yet, even amid feeling uncertain and afraid, Strankman was not forgotten by the Lord.

Her first foster family got involved with The Salvation Army—however, home life remained different from church life. Strankman moved back in with her parents once more before being placed in her final foster home with Betty and Frank Strankman.

The Salvation Army remained a constant in Strankman’s life. When recalling her youth, Strankman said the two most stable elements of her childhood were Sunbeam troop meetings and overnight summer camp.

Both programs impacted Strankman’s life and the positive effects can still be seen today.

No matter where she was living, Strankman got connected with her local Sunbeam troop and remained diligent in completing her badgework from Bird Study to First Aid to Bible Study.

However, as a young adult, Strankman found herself struggling again.

Yet, at that moment Strankman received a text from one of her former corps officers, Major Jennifer Perine. This simple text, asking how Strankman was doing, changed her life.

Strankman then decided to move to Spokane, Washington and began working at the corps.

“That was probably the biggest turning point in my life,” Strankman said. “I came to Spokane and it was like hitting a reset button.”

“I rededicated my life to God. I got so much better. I surrounded myself with good people. I got really involved with the church.

Strankman returned to college and is working toward a degree in psychology with a focus in child and adolescent development. Strankman said she wants to help kids like her, and “offer them hope.”

“I can use my testimony and skills I’m learning in college to help others,” she added.

Strankman’s story has now come full circle. Not only is she very involved at her local Salvation Army in Spokane, but she also serves as the leader for the Moonbeam Troop (youth ages 4 to 6 years old).

Being involved in Troops as a leader now, Strankman said she was able to reflect on all the work she did as a Sunbeam and the impact it had on her life.

Strankman shared her story with Northwest Divisional Commander Lt. Colonel Cindy Foley. Inspired by her story and dedication to youth ministry, the wheels were set in motion to help Strankman receive her Commissioner Sunbeam award.

On October 19, Strankman was interviewed by a Commissioner Sunbeam Review Committee and passed with outstanding marks resulting in her award.

“Kim is a great example of how hard work pays off,” said Captain Jennifer Masango, Recruitment and Candidate Secretary and Associate Territorial Youth Secretary. “Whether it is finishing high awards, like Commissioner Sunbeams, applying what she’s learned, or serving as a leader, we are encouraged by such young people. May God continue to work in her life.”

Strankman was presented her Commissioner Sunbeam award on October 24.

Today, Strankman is a living legacy and paying it forward. She even upholds her record of attending camp every summer, though now as a staff member at Camp Gifford.

By applying what she learned in Sunbeams, Strankman shows God’s love to others in real ways every day.