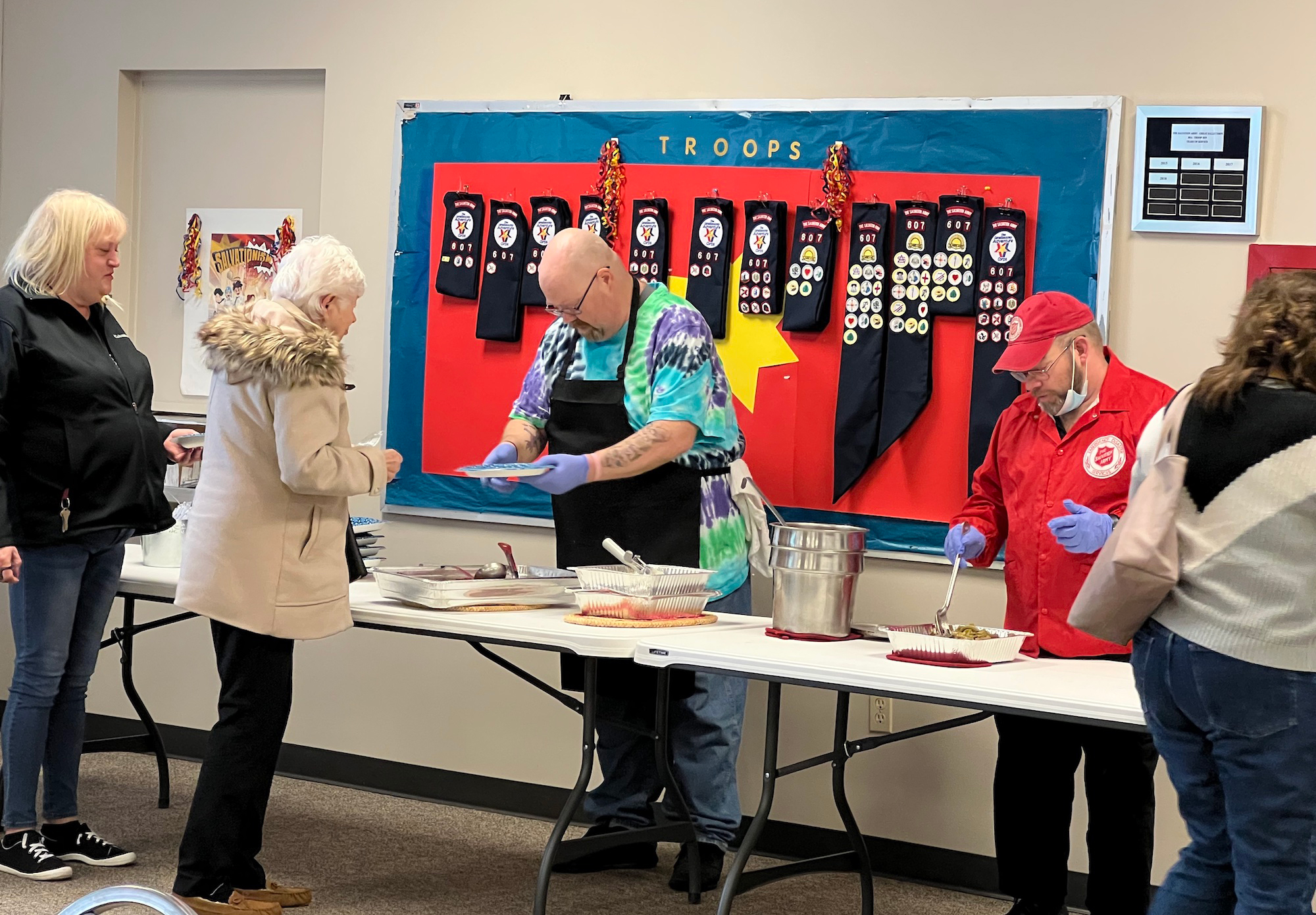 In Montana, The Salvation Army Great Falls Corps is serving “church around the table” with a free lunch on the last Sunday of each month.

In Great Falls, Montana, Majors Mark and Monica King have served as corps officers, or ministers of religion, for the last eight years.

Inspired by fellow officers, Majors Donald and Martha Sheppard, who increased fellowship with their “Sunday Soup” ministry, Mark King said he wanted to try a similar concept with his congregation after noticing how quickly people dispersed following services.

In an effort to extend ministry opportunities for their community, the Kings began hosting Family Table services where attendees gather for a meal and hear the gospel, at no cost each month. Family Table services provide “all of the components of a traditional worship service,” including Scripture readings, musical elements and prayer.

“Eating a meal together is one of the most pure things we can do,” Monica King added. “I like to say the time around the table is sacred.”

By inviting people to stay at the corps and share a meal together there’s “intentional time for fellowship,” Mark King said.

“You don’t have to worry about getting to a restaurant or going home and making a meal. Just stay here and let us take care of lunch,” Monica King said.

The Kings said they began holding Family Table services at their previous appointment in Pahrump, Nevada, where “it was very well received.”

“It seems that we were able to really connect with people and we saw more volunteerism, attendance and participation in our ministry overall,” Mark King said.

By holding “church around the table,” Monica King said the corps can extend its ministry to people who “aren’t necessarily comfortable in more traditional [or] formal church settings.”

Some people may feel “like a fish out of water” because they lack understanding around service structure. “There can be a sense that church has to be very formal and that can put some people off,” she added.

By offering church services in the fellowship hall over a meal, the Kings said they hope to appeal to people who may be considering coming to church for the first time.

In February, the Kings said 19 individuals joined the corps for the first Family Table of the year. “We recognize that this is going to start slow,” Mark King added.

By having worship services in a more informal setting, people “feel comfortable asking a question to the person sitting next to them,” Mark King said. “It was really neat to see people who knew what was happening help the folks next to them who didn’t.”

Major Mark King leads a Family Table service with opening thoughts and prayers. “I’m a fan of using both a PowerPoint and a bulletin insert for note takers. So whether you’re visual, whether you’re a writer or you learn by listening…I want to provide all of those opportunities for however you receive information,” he said. Courtesy Major Mark King.

In addition to inviting members from the congregation following Sunday services, the Kings said they also invite people from their family services office. When Mark King sees someone sitting at a table by themselves, he encourages corps members to join them “so they don’t feel alone.”

With no limit on the number of people that can attend, the Kings want people to know there’s room for everyone at Family Table services.

“We’re prepared to set up as many tables as necessary,” Mark King said.

With over 30 years of experience in the food industry, Joe Pearson said he offered to help and share his cooking expertise with the Family Table ministry as a volunteer.

The Salvation Army social services in Great Falls supplies the ingredients for the meals, which determines what Pearson will cook, allowing him to get “experimental.” For two of the recent Family Table services, Pearson helped to prepare and serve a brisket meal and a spaghetti dish served with salad.

“We’re all one church really, you know? We look at where there’s a need and if we can fill a need or help out, that’s what we want to do,” he said.