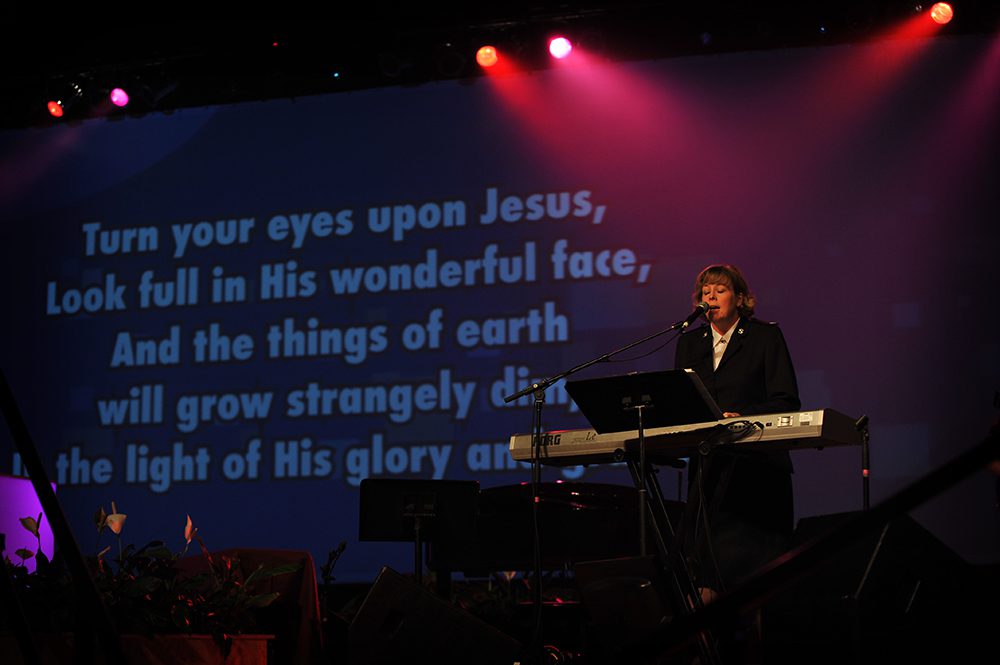 ‘Fire in the Blood’ at final evening Gathering meeting

The “One Message” meeting of The Gathering 2012 began with performances from “Dance Like David” by the Territorial Youth Band, “Wonderful Story” by mass Singing Companies, a newly arranged rendition of “O Boundless Salvation” by the Pasadena Tabernacle Youth Chorus, and “My Life Must Be Christ’s Broken Bread” by the Western Territorial Staff Songsters.

In her message, General Linda Bond spoke on the root of our salvation—the sacrifice Christ made in dying on the cross.

“We mess about with Satan. We flirt with evil. We dance with darkness. This is what darkness does; it brutalizes goodness,” Bond said. “The whole physical, emotional, spiritual pain of our Lord Jesus Christ continues to upset me. I pray that Jesus would keep me near the cross.

“The lamb of God was slain before the foundation of the world that you would be saved,” she said. “That I would be saved. Not just about the physical actions of that day or the emotional pain that he suffered, but something happened at Calvary that day that changes life forever. We understood like never before that salvation from God would come through the blood of Jesus Christ. It would be at the cross that we would first see the light.

“We’ve got a battle on our hands; why is that?” Bond asked. “Because we are justified by the blood of Jesus. Have you been to Jesus for the cleansing power? Are you washed in the blood of the lamb?”

Bond said that cleansing happens all by grace, which is undeserved merit. “If it’s not amazing, it’s not grace,” she said. “The whole Bible has one storyline: God’s relentless pursuit for relationship. He wants us bad so badly that he gave his only son so that we may be reconciled by his blood.”

She said the cross of Jesus is at times an offense to people, to other religions, to religious people, and even Salvationists.

The Salvation Army, Bond said, has always faithfully preached the cross of Christ.

“Unless you realize, beloved, that your sin is against God and you repent and confess your heart before him, you cannot be saved,” Bond said. “I pray tonight that this would really be a salvation meeting and you would come to Jesus.”

This final evening meeting of the Western Territory congress resolved with a colorful, streamer-filled, brass, hula, and voice finale—“Fire in the Blood.”

Follow New Frontier on Facebook for live updates from The Gathering, and see more photos at thegatheringpix.com.