With its divisional headquarters in Manhattan completely shut down, The Salvation Army ran its emergency response operations from the New York City Office of Emergency Management (OEM) Emergency Operating Center (EOC) adjacent to the Brooklyn Bridge, a perspective that provided a mesmerizing view of an apocalyptic New York City skyline.

Within hours after the storm passed over New York City, a coalition among the Mayor’s office, the National Guard, New York Police Department, New York Cares, and The Salvation Army delivered an unprecedented emergency surge of minimum standard ready-to-eat meals and bottled water to 17 locations throughout the city. Over a 12-day period, 2 million ready-to-eat meals and 700,000 bottles of water were distributed.

During a disaster, the most vulnerable population in any community is its special needs population. For 15 days, The Salvation Army provided over 40,000 low sodium, vegetarian, and Kosher meals for the evacuees housed in all eight special needs shelters scattered throughout New York City.

There was also a need for trucks on the ground, trucks with certified drivers who knew not only the normal challenges of the formidable inner city roadways, but also how to navigate around closed tunnels and bridges. The Greater New York fleet of Salvation Army thrift store trucks and drivers took on the task, and a continuous convoy of Salvation Army trucks were deployed, delivering both shelter meals and emergency supplies to various government, community, and Salvation Army locations.

Myriad disaster relief partners, including traditional allies such as the American Red Cross, Southern Baptist Disaster Relief, and UMCOR, worked side by side to address the needs of all New York communities, leaning heavily for assistance from additional key players, such as the Tzu Chi Foundation and the United Sikhs.

The emergency response phase took three weeks to complete with the help of these partnerships and help from local congregations, volunteers and crews from around the country coming in to be part of the effort.

The superstorm Sandy recovery phase will take months, if not years, and because The Salvation Army lives in all of these impacted communities, it has no exit plan. The community recovery process will now begin, evaluating the unmet needs of the survivors, and hopefully identifying ways to fill those needs. 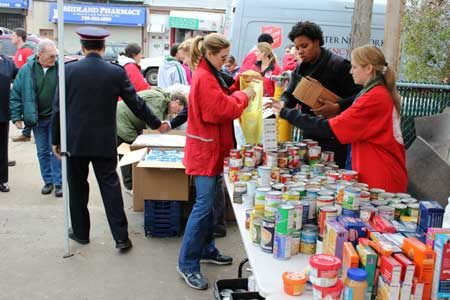 on the corner “The battle between belief and nonbelief”

the spice box “Not too old to serve”

from the desk of…Memories, magic and the message