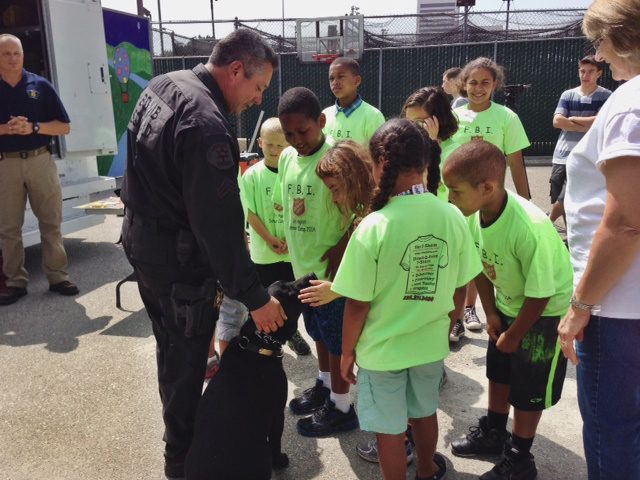 “I think when kids get to be exposed to programs like this they get to see things outside their own environments, and they get to have fun, they get to meet other kids in the program, they get to do things they normally wouldn’t do, they learn a lot,” said Susan Froomer, camp coordinator. “We talk about staying in school, respecting adults, doing the right thing and being kind to others.”

The Westwood Transitional Village is a 40-unit residential housing facility that provides supportive services to families experiencing homelessness. Families can spend up to two years at the village while they stabilize and acquire skills and resources needed for independent living. Roughly 150 people live there at a time, with two-thirds of the population being children.

National Center on Family Homelessness data suggests that underprivileged youth are twice as likely to be expelled, get suspended, or drop out of high school. To combat this trend among its residents, the Westwood Transitional Village teamed with the FBI to encourage youth to stay on the right side of the law.

From June 23-27, the junior agents-in-training learned what it means to be in the FBI. With FBI Special Agent Daric Manser, campers operated the remote-controlled bomb robot to learn how bombs are safely deactivated.

“I think it’s important that the FBI participate in this because people gather more from a one-on-one relationship,” Manser said. “Being able to go out and meet people, talk with people, demonstrate, show things on a one-one-one basis, you can’t beat that.”

In addition campers met Duke, a bomb-sniffing dog, learned about gang activity, Internet safety, martial arts, and water safety. On the final day, they toured FBI headquarters in the Federal Building in Westwood and received junior agent certificates of completion.