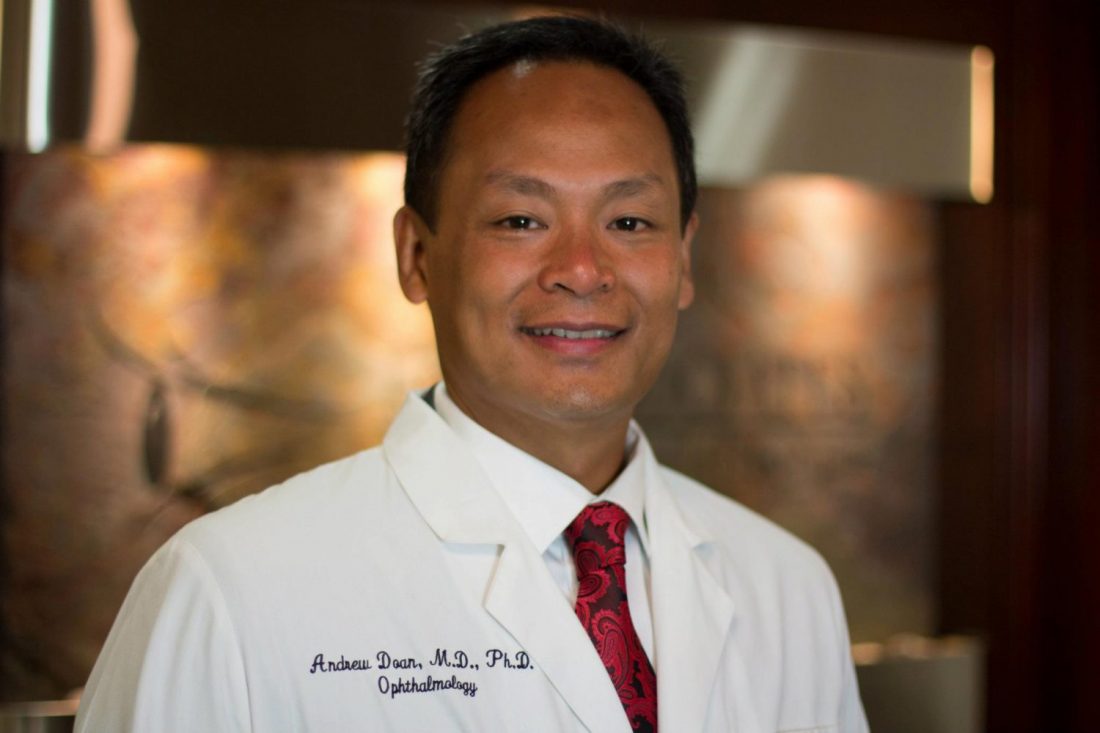 Open a book, scan a page of text, commit it to consciousness and recount it with accuracy—also known as photographic memory. While only a small percentage of people actually have this ability, Dr. Andrew Doan counts himself among them.

“I was bored in school,” Doan said. “But video games gave me that challenge.”

They made him feel alive. They gave him an outlet for his aggression, and the rage he developed being bullied as a kid. Any down time he had was likely monopolized by shooting something on his computer screen.

After finishing at Reed College, he went to Johns Hopkins University School of Medicine on a full scholarship. That’s when he learned of massively multiplayer online role-playing games (MMORPGs), which allow users to compete and interact with each other online. MMORPGs such as Ultima and Age of Empires took Doan’s addiction to the next level.

“The only time I stopped was to use the bathroom and eat,” he said. “My arms constantly ached from pressing the joystick.”

Doan later married his junior high school sweetheart, Julie, started a family and opened an ophthalmology practice. His life was changing, but the gaming never missed a beat.

He’d go to school and work in the daytime, get home at 4 p.m., game until dinner, then once Julie climbed into bed around 9 p.m. he’d hurry back to the computer, where he’d game until 4 a.m. the next day. Then, he’d grab a few reluctant hours of sleep and repeat the cycle.

“I was playing 50 to 100 hours a week for over 10 years,” he said. “That took a toll on my family. I slept only two to three hours a night. Then I developed obesity because I didn’t work out. I was athletic in college and high school. I eventually developed Carpal Tunnel. I had to take super strength painkillers just to function as an eye surgeon.”

Unbeknownst to Doan, the consistent exposure to violent video games caused cortisol and adrenaline to build up in his brain, which led to violent outbursts.

“I became physically and emotionally abusive,” he said. “At one point my wife was rolling back and forth in the fetal position in our closet, crying because she had married a monster.”

Julie escaped one night and drove with their then 2-year-old son and 1-year-old daughter to her mother’s 3,000 miles away.

Then came a sobering realization.

– The average video game enthusiast isn’t a teenage boy. He is a 35-year-old man, according to the American Journal of Preventive Medicine.

– Scientists at the Stanford University School of Medicine found that men are more reactant to video game play than women in a brain imagery study of 22 young adults (11 women and 11 men) playing a simple computer game. The research found that activity in parts of the brain associated with addiction and reward was much greater in men than in women, and that men were more aggressive in playing.

“I had no friends, I had no connection to the real world,” he said. “I was destroying my marriage, my medical career, my life. I was contemplating suicide.”

Gaming is a hobby for most, but for Doan and many others, it’s a black hole.

In 2012, an 18-year-old Taiwanese gamer named Chuang reportedly died after a 40-hour Diablo III marathon at an internet cafe.

Xiao Yi was 13 when he jumped from the top of a 24-story building. He left behind a note for his parents written from the perspective of his character from World of Warcraft, which he played in the days leading up to his death. The note even included a wish to meet three of his gaming friends in the afterlife.

The American Psychiatric Association (APA) added video game addiction to the “Diagnostic and Statistical Manual of Mental Disorders” in May 2013 and included it in the conditions for further study section as “Internet Gaming Disorder.”

Though internet gaming disorder is now acknowledged by the APA, it is still debated how much this disorder is caused by gaming itself or whether it is largely a byproduct of other disorders.

Doan, now 43, has since beat his addiction and repaired his marriage, which he credits to his relationship with Jesus Christ. He dedicates much of his research to understanding the brain’s response to addictions, including gaming. He works as head of the Department of Mental Health Addictions and Resilience Research at Naval Medical Center San Diego* and wrote “Hooked on Games: The Lure and Cost of Video Game & Internet Addiction” (FEP International, 2012).

Much of what he now knows about video game addictions, he experienced firsthand. He insists video games are harmless—beneficial even—in moderation, but indeed addictive in excess.

Doan extensively studied the neurosensory retina in the eyes, which connects with the brain through approximately 2.4 million nerve fibers, making the eyes an extension of the brain. Gaming works through the visual system to reprogram the brain through neuronal plasticity, or the altering of the structure, function and organization of neurons in response to new experiences, he said.

Through his research, he discovered that MRI scans exhibit the same brain patterns on gaming addicts as drug addicts. “Cocaine acts on the brain physically, whereas gaming does it artificially,” he said. “They both give you a stimulation that wears off when exposure isn’t steadily increased.”

– Read Insight Media’s tips for parents on how to prevent and stop video game addiction in children at bit.ly/stopvgaddiction.

Doan also pointed to the “short refractory period” as a lure of video games. The dopamine rush in your brain that gives you a “high” can be recreated with little time between gaming sessions, as opposed to some drugs which require a longer refractory period. “Video games are like movies and books laced with digital crack,” he said.

Video games caused dysfunction in Doan’s relationships, career and physical health. Perhaps the most difficult part of it, he recalled, was seeing his son Nicholas, now 17, fall into the same trap. Addiction is often generational, he added, and gaming is no exception. “My son was so engrossed in this game that there was nothing else he wanted to do,” he said.

Doan said Nicholas’ accolades since quitting gaming include making the honor roll each of the past three years and becoming a regional champion in high school track. “We would have never known if he hadn’t been able to stop gaming,” he said. “And now he tells us he’s glad we took them away from him.”

Doan now serves as a 12-step ministry leader at his church in Temecula, Calif. Similar treatment options are emerging across the country for gaming addicts. Online Gamers Anonymous (OLGA), formed in 2002, is a 12-step, self-help, support and recovery organization for gamers and their loved ones who are suffering from the effects of excessive computer gaming. It provides a variety of message boards, Skype meetings and other tools for healing and support. In July 2009, ReSTART, a residential treatment center for “pathological computer use,” opened in Fall City, Wash.

Doan praised such treatment options and even volunteers with OLGA, but retained that much needs to be done by way of prevention. First step, he says—warning labels.

“We’re behind in this field,” he said. “There’s no reason they can’t put warning labels on games, stating that they’re addictive…they’re digital crack.”

*The views expressed by Dr. Andrew Doan are his own and do not necessarily reflect the official policy of the U.S. Navy or Department of Defense.