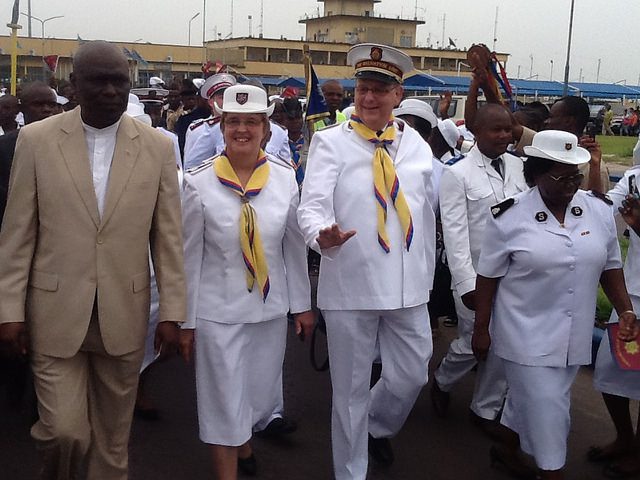 The General and Commissioner Silvia Cox lead 80th anniversary celebrations in the Democratic Republic of Congo.

A crowd of thousands of white-uniformed Salvationists greeted General André Cox and Commissioner Silvia Cox (World President of Women’s Ministries) on their arrival in Kinshasa, the capital of the Democratic Republic of Congo (DRC). Blood-and-fire Salvation Army flags flew proudly as the local Salvationists greeted their international leaders. N’djili Airport was turned into a sea of white, and the ground shook to all types of musical praises to God.

Among the crowd at the airport were Commissioner Madeleine Ngwanga (Territorial Commander, Democratic Republic of Congo Territory) and the Vice-Governor of Kinshasa, Clément Bafiba Zomba. Two children presented the visitors with flowers to assure them of a warm welcome.

At a press conference the General sent greetings to the people of the DRC and offered encouragement to the country’s Christians.

The international leaders were in DRC to celebrate the 80th anniversary of Salvation Army ministry in the country. The main celebrations took the form of a congress attended by more than 7,600 people. The backdrop to the platform left people in no doubt as to why they were there–an outline of the DRC was next to a large “80 ans” (“80 years” in French, the country’s main language). The attendances throughout were particularly impressive when taking into consideration that many sessions were held during normal working hours.

The General was keen to ensure that local Salvationists took full ownership of the celebrations, asking the congregation on several occasions: “What do you expect from this congress?” The territory’s past was also recognized, with Salvationists from France and Belgium present in the congregation to acknowledge the historic links with The Salvation Army in those countries.

Almost 2,000 women attended a rally on Thursday, where the guest speaker was Commissioner Cox. The rally was also attended by the Minister of Gender, Family and Children, Mrs. Marie-Ange Lukiana Mufwankolo. At the men’s group activity and at worship with youth on Friday, and again at the music festival on Saturday, the General spoke eloquently, with many people moving to the mercy seat. The young people demonstrated the huge amount of talent to be found in DRC, with a gymnastic display proving to be particularly spectacular.

One of the most memorable sights of the visit was an hour-long march of witness through Kinshasa, which was made up of thousands of Salvationists and others from Salvation Army schools, medical services, divisions, districts, sections, projects and other ministries.

The final salvation meeting, attended by the deputy governor of Kinshasa Province, included the spectacular mass enrolment of 302 senior soldiers by the General. At another point in the meeting, the international leaders delighted the congregation by dancing to the rhythms of Kinshasa Staff Band.

The congress concluded with the symbolic releasing of 80 pigeons, in recognition of the faithfulness of God in DRC over 80 years.

During their time in the DRC, the international leaders also opened the newly extended Boyambi Health Centre and led officers councils.

Based on a report by Major Denis Mafuta