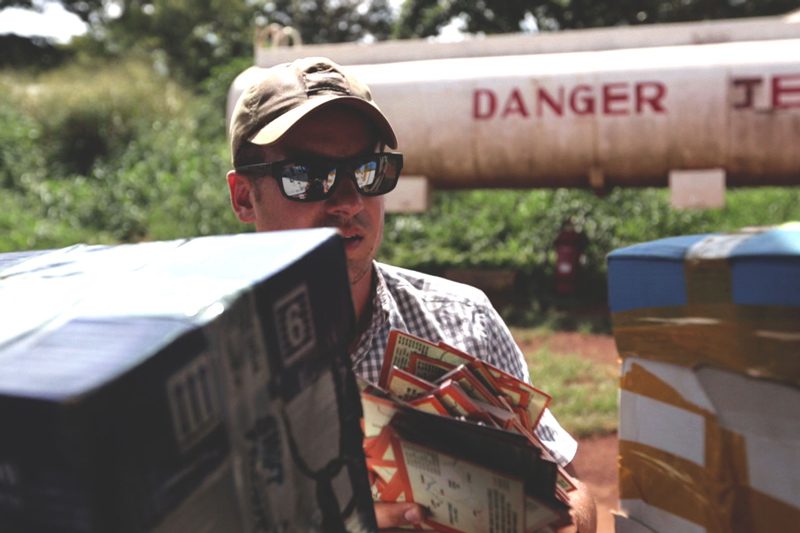 Coming home is a powerful feeling. As someone who enjoys the comforts and ease of a familiar place, I am not a prime candidate for living and working in the jungles of central Africa. The desire for home was never stronger than after four days of battling cerebral malaria and listening to a steady stream of Al Jazeera Arabic thanks to my Moroccan caretakers in a UN hospital in the Democratic Republic of Congo (DRC).

It’s in moments like this—laying on a cot with a 104-degree temperature—that one starts to wonder: what am I doing out here?

I had been captured by the story of children who were abducted by the Lord’s Resistance Army (LRA) and forced to commit mass atrocities under the direction of the maniacal leader, Joseph Kony. Having no real political ambitions in 2008 other than avoiding International Criminal Court warrants, Kony relocated his forces from Uganda to the DRC and the Central African Republic because of the utter lack of governance and security available to the vulnerable populations there.

This story captivated and baffled me. I consumed every piece of information on the LRA and sought to learn the root causes of the conflict and the enablers that allowed the LRA to exist. After a few internships with Invisible Children, I found myself working on the expansion of the organization’s programs into the DRC and the Central African Republic—an expansion that mirrored the LRA’s.

In my role at Invisible Children I moved to Uganda, working to identify and develop new programs to stem LRA violence. It was a process of building perseverance and mental self-control that allowed me to focus on my job and learn to enjoy life on the other side of the world. It comes naturally to some, the ability to pick up and move, travel and leave family, friends and a life behind; for me it was a constant struggle.

The LRA is a unique armed group in that it is almost wholly comprised of combatants who were once captured as children and conditioned, brainwashed and trained into soldiers in Joseph Kony’s army. Former LRA fighters I’ve spoken with have told me that to survive in the captivity, you have to embrace the role of fighter and assume a new identity within the group. The LRA is known for its brutal tactics of brainwashing children, forcing them to kill parents or loved ones, so that they know, even if they wanted to go home, no one will forgive them for what they did. They believe their only option is to live as a LRA fighter.

In contrast to this horrific conditioning of children, I learned the incredible power of forgiveness from communities who in spite of decades of violence perpetrated by the LRA, were willing to forgive LRA combatants who wanted to return home. Recognizing that most of the LRA was captured as children and was forced to commit violent acts, people wanted their loved ones to come home. While childhoods could not be replaced, they would be welcomed.

After consultations with local leaders and UN and NGO partners, we realized that the feelings associated with coming home could be harnessed and communicated to LRA combatants. This feeling of returning home and having that message conveyed from siblings, parents and community leaders might just be the most powerful tool in stopping the LRA.

We started small. We printed a few batches of fliers, showing LRA combatants who had successfully returned home and scattered them using networks of local hunters in areas where the LRA operated. Enlisting local FM radio personalities, we began to broadcast messages to the LRA using music, storytelling and first-hand testimonies of those who had escaped. We then constructed six FM and two shortwave (similar to AM but used widely in Africa) radios that would broadcast messages 24 hours a day.

We began to see results, and soon there were LRA combatants surrendering every week. We raised additional funds and began dropping hundreds of thousands of fliers out of planes over LRA camps and produced thousands of hours of radio messaging. After years away from home, even the most battle-hardened combatants were weakened by thoughts of home, messages from sisters and the songs of their childhood.

There was something so powerful in seeing families be reunited after years of separation. My predisposition for home and comfort gave me some insight into harnessing these feelings into messages that would pull at the strings of homesickness in LRA fighters.

By the end of 2013, 240 adult male LRA combatants who comprise the core of the LRA’s fighting force had surrendered and over 2,000 women and children had returned from the group since the defection messaging began. It is a model that has been studied by other professionals working on similar global conflicts and it continues to degrade the LRA’s capacity for violence, which has been reduced by 93 percent since the program started in 2011.

I received a call one morning from a LRA combatant returning to Uganda after 12 years fighting in the jungle. I drove down to meet him and to take photos for future fliers and record messages for radio. When I met him, there was a palpable anxiety; he didn’t have time for me and my photos and my voice recorder, he just wanted to see his family—that I could understand. A few months later, I finally got him to record some quality messages for FM radio and to take pictures for fliers. His message was a simple one: “Myero makato me camo karama ento pe ilum” (it’s better to spend Christmas at home than in the jungle).

I couldn’t have said it better myself.

Sean Poole is the director of international strategy for Invisible Children. He is continuing to work with the organization as it downsizes the bulk of its U.S. programs and operations to prioritize political advocacy and central Africa programs through 2015.