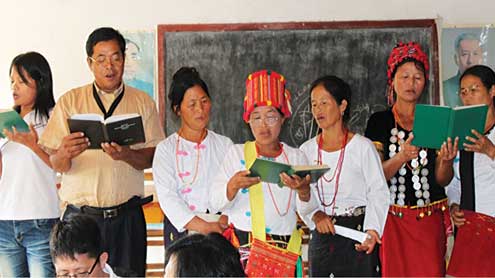 Salvationists are welcomed to Dai Hai village by female drummers in national costume and a group of male musicians. (Photo by Arlene Dooley)

Ten people from the U.S. Western Territory, Australia and England traveled to Yunnan Province, China, on Oct. 18, 2010, following The Salvation Army’s Hong Kong 80th Anniversary celebrations. For five days, led by Lt. Colonel Alfred Tsang, we visited the regional office in Kunming, projects in Longchuan and villages along the Myanmar and Thailand borders.

Hospitals and clinics—where medical care for pregnant women has reduced infant mortality rate by a considerable amount—were on the itinerary. The facilities also care for HIV/AIDS patients and provide education disease prevention.

A group of women drummers in national costume, accompanied by a small group of male musicians, met us as we approached the Dai Hai village. The women performed traditional dances with the drums to the musicians’ accompaniment. The bandleader—who also played the saxophone and bagpipes—entertained us with a bagpipe solo.

Salvation Army projects in Dai Hai included the building of the community center, which has three rooms on the ground floor marked “Women’s (Home League),” “Seniors” and “Youth.” Upstairs is an open-sided community room.

While some of the women fixed lunch, we visited homes in the village to see how the micro-loan projects had benefited them. Most were raising pigs and chickens as well as some agriculture. They had toilet facilities (a ceramic urinal built into the ground) and biogas for cooking. Biogas is produced from the waste of animals and humans that goes into a septic tank-type system. The gas produced is piped into the house to a burner, which provides gas for cooking. They also had solar panel water heaters on the roofs, providing them with cold and hot running water in the house.

Access to running water, toilets and better food has benefited the villagers; they are living longer with fewer illnesses.

Dai Hai had a church with both a Protestant and a Catholic congregation. Choir members from the two congregations sang for us while we waited for lunch.

We then visited another village that has requested micro-loan projects so it can experience the improvements seen in Dai Hai. Of interest here was the number of people with cell phones—an interesting contrast.

Returning to Kunming, we toured the Cultural Center, which depicts the different minority villages of the Yunnan Province, illustrating the variety of home styles, dress and entertainment.

Before returning to Hong Kong we visited the Home Aids office—a project started by The Salvation Army and another non-governmental organization (NGO) to provide help to those infected with HIV/AIDS. Over 1,000 volunteers visit patients, making sure they have medication and holding classes on HIV/AIDS prevention.

The people of China, especially the villagers, appreciate the aid that comes through The Salvation Army and other NGOs to help them improve their lifestyle. 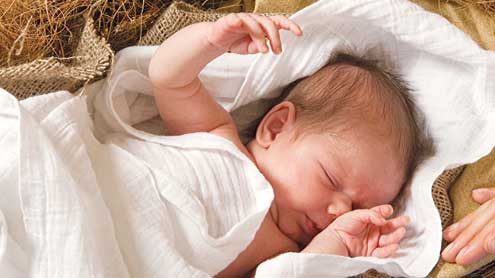