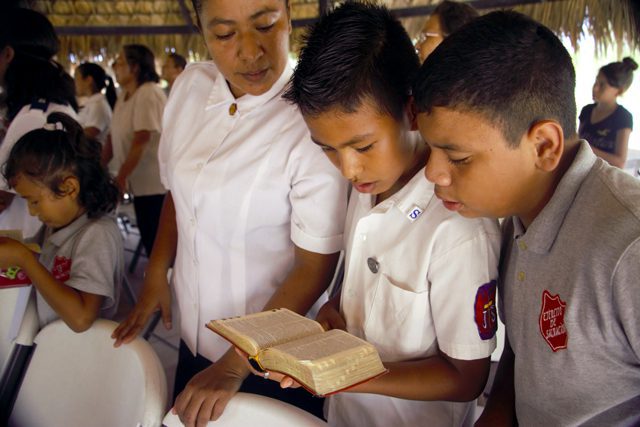 Pledge $20 a month and unlock potential in children worldwide.

The Salvation Army Overseas Child Sponsorship program has impacted thousands of children worldwide for years—all through donations from individuals willing to help a child they will probably never meet.

Nazmin is one of those children, growing up initially on the outskirts of Mazatlan, Mexico, in the community of Felicidad. Here homes are constructed haphazardly from discarded materials, drug and alcohol abuse are common, children stop attending school early—many remaining illiterate all their lives—and girls become pregnant in their early teens, ending up with a household of children as a single parent.

The reality of Felicidad is a stark contrast to its name, which means “happiness.”

Nazmin’s mother, Claudia, related the challenges they faced. Nazmin grew up in Felicidad with her parents and younger brother. Her father struggled with alcoholism and did not work consistently, making it difficult for the family to get through each day.

“Their father had many vices.” Claudia said. “We didn’t have anything to eat so we had to pick fruit from the tree grove. I couldn’t look after my children if I was to find work. They were very little.”

When Nazmin was 5 and about to enter kindergarten, Claudia worried about how they would afford the school uniform, fees and school supplies. During this time she received an invitation to Home League, a fellowship group for women, at The Salvation Army Children’s Home, located just outside Felicidad. When The Salvation Army officers there discovered the family’s situation, they invited Claudia to register her children to live at the home.

Now 16 years old, Nazmin has resided at the Children’s Home for 10 years.

Children from The Salvation Army Children’s Home in Mazatlan, Mexico.

Through these years The Salvation Army Children’s Home provided Nazmin’s basic needs: food, clothing and shelter. The environment allowed her to develop into a strong, confident young woman. While many of her peers from her old neighborhood dropped out of school and started families at a young age, Nazmin excels in school and dreams of becoming an English teacher.

She often thinks of her old friends in Felicidad, realizing how different her life could be.

“I would be in the street,” Nazmin said. “I wouldn’t be in the grade I am in now. I would be doing drugs. We wouldn’t have enough money for me to study. In the home, I have been given the opportunity to study and to know the word of God.”

Through weekly lessons in traditional folk dance at the home, Nazmin has become a skilled dancer. Her leadership skills developed as well, and she assists younger children with homework and helps teach Sunday school at church.

Around the world thousands of children like Nazmin are thriving in Salvation Army-run orphanages, schools and corps. The Mazatlan Children’s Home where Nazmin resides is one of the homes that received support through The Salvation Army’s Overseas Child Sponsorship program, which allows people in the Western Territory to empower children like Nazmin around the world, impacting them tangibly. The Salvation Army is helping children in countries throughout Africa, Asia and the Americas within established programs run by local Salvation Army officers. The families and community members also benefit from employment opportunities and the opportunity for spiritual care through church services and ministries.

Nazmin’s family received more than shelter and education from the Children’s Home. Two years ago, Nazmin’s father died. When Claudia could no longer maintain her residence, the officers at the home offered her a live-in position as a cook.

“I have been working here for two years,” Claudia said. “They offered me a home. I don’t have a house. My husband died. They have supported me a lot and they help my children continue with their studies. They give them everything. They also support us as Christians. We are Christians and we attend the [church] meetings. We are soldiers in the church.”

Sponsors can give a discretionary donation to a specific Salvation Army-run home or school in a particular country or they can sign up to become a sponsor to an individual child currently participating in the program with a pledge of $20 per month.

“Sponsors make all the difference to the children they support with their contributions,” said Major Don Gilger, director of world missions and the Overseas Child Sponsorship program in the Western Territory. “A warm bed, a nice meal, a good education and the knowledge that there is a God who loves them enough to make it all happen. Sponsors are the hand of God that changes the world one life at a time.”

Children from The Salvation Army Children’s Home in Mazatlan, Mexico.

The donation funds food, clothing, medical and dental support, safe environment, educational opportunities and spiritual development. The program’s administrative costs are funded separately, allowing 100 percent of the donation to go to the home or school. Sponsors can also correspond with their sponsored child.

“Sponsors can encourage them in their letters and share with them about God’s great love for them,” Gilger said.  “Sponsors have the unique opportunity to see the intrinsic worth of a child without ever having met them and heap blessings on their lives as they support them with prayer and finances.”

“We started out sponsoring one or two kids in 2009 and are now sponsoring five kids. At Christmas time instead of a gift exchange in our department we collect money,” said Joan Vander Broek, a key figure in collecting the donations. “We could see a need and wanted to do something for the children. Personally, I feel that I am doing something that God has told us to do to help others in need.”

The group receives letters from a sponsored child in the Philippines with updates on how his life is going, how his family is doing, and what he’s studying.

As Broek said, “It’s nice to see the children grow.”