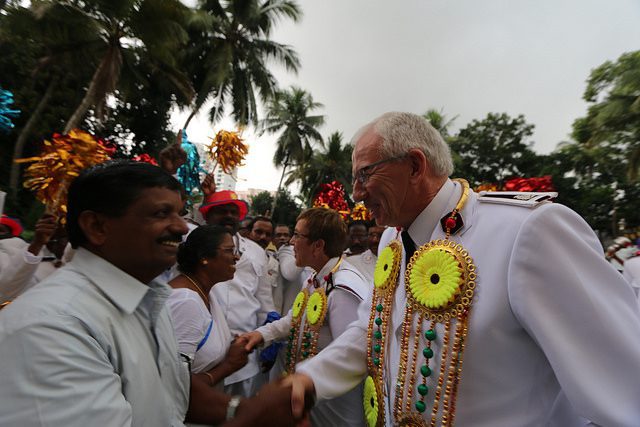 The Chief of the Staff visits India South Western Territory

More than 100 Salvationists and friends welcomed The Salvation Army Chief of the Staff, Commissioner Brian Peddle, and World Secretary for Women’s Ministries, Commissioner Rosalie Peddle, at Trivandrum International Airport in India. The Chief told the welcome party that he was “expecting blessings” during his time in the India South Western Territory. “I find hope in young people in this wonderful country of India,” Brian Peddle said.

The Chief also spoke about the importance of the different denominations working together as a united Church. Rosalie Peddle gave the concluding prayer.

After officers’ councils the next day, around 3,000 Salvationists and friends gathered at the Jimmy George Indoor Stadium for an evening of celebration and praise featuring timbrel displays, skits, choreography and songs. Enthusiastic young people greeted the international leaders with drums and other musical instruments. “God has a plan for you and a dream about The Salvation Army in India,” the Chief said during his Bible message. After his words of challenge, people of all ages made their way to the mercy seat.

A congregation of about 700 people worshipped with the international leaders Sunday morning at Trivandrum Central Corps, marking the final event of the visit. The Peddles enjoyed a tambourine display and a recorder performance by the corps’ youth.

The Chief spoke about the prophet Isaiah, comparing his situation with that faced by Salvationists today.

“We are called by God, who raised us from our circumstances,” he said. More than 200 people made their way to the mercy seat, and some young people offered their lives as officers in The Salvation Army.

During their time in Trivandrum, the Peddles led the three-day Conference of Indian Leaders (COIL), which included leaders from every Indian territory.

From a report by Major Jose P. Mathew